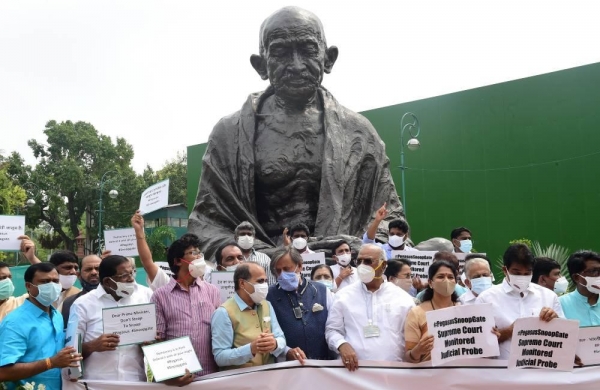 Express News Service
NEW DELHI:  With the Centre requesting him to convene an all-party meeting, the task is cut out for Speaker Om Birla to prevent a washout of the Moonsoon session in the Lok Sabha.   For the government, the stalemate is due to the race between the Congress and the Trinamool Congress to take credit for the Parliamentary disruptions. “There’s complete confusion in the Congress leadership. The Opposition had agreed for discussion on Covid in the Lok Sabha, but backed off later,” Minister of State for Parliamentary Affairs Arjun Meghwal told this newspaper.

The Opposition’s stiff conditions — the presence of PM Narendra Modi and Home Minister Amit Shah and a reply on the discussion by either of them on the Pegasus row — for resolution of the Parliament logjam wasn’t agreeable to the government, indicated Meghwal.“This has never been the norm. Reply is always given by the minister concerned, and conditional discussions don’t take place.”

The Lok Sabha witnessing complete breakdown of communications between the treasury and the Opposition benches is worrying other parties. “My anxiety is that important bills may be passed in din in the House, which will be more disastrous for the democracy,” BJD’s senior leader Bhartruhari Mahtab said, stressing that both sides will need to move forward to arrive at some solutions. He also noted that while the Rajya Sabha took up discussion on Covid, the Lok Sabha, too, should take up public interest issues.

But, Congress chief whip in Lok Sabha K Suresh asserted the government has made no effort to reach out to the Opposition. “It is not the Speaker, but the government that doesn’t want discussion on Pegasus.”But Union Minister Bhupender Yadav contended that the Opposition has shown least respect for the conventions. “The Opposition has struck disruptive stance since the beginning by not even allowing the PM to introduce new members of the Council of Ministers.”

“It was previously agreed that the Lok Sabha will take up three short duration discussions, and calling attentions each and allow taking up important legislation,” said Meghwal.

Didi in Delhi, TMC looks to up the anteWhat makes the Lok Sabha Speaker’s task challenging is that the Trinamool Congress is bracing to go more belligerent in the presence of its newly appointed Parliamentary chairperson Mamata Banerjee in Delhi.

(With inputs from Richa Sharma)