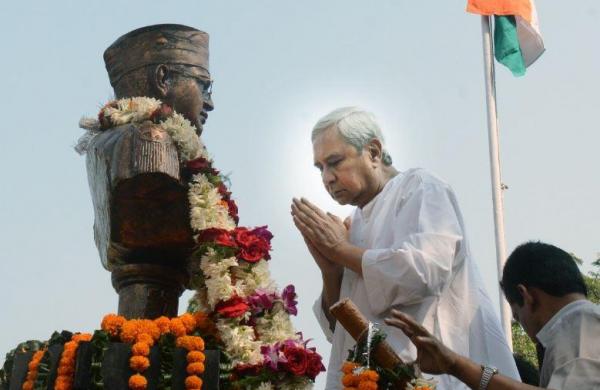 By Express News Service
CUTTACK: Chief Minister Naveen Patnaik on Saturday paid rich tributes to Netaji Subhas Chandra Bose on his 125th anniversary and laid the foundation stone for an ultra-modern bus terminal, named after Netaji, in Cuttack city, the birthplace of the great soul.

After paying floral tributes to Netaji, the Chief Minister unfurled the National Flag at the Netaji Birth Place Museum in Odia Bazar and then laid the foundation stone of Netaji Bus Terminal at Khannagar. “Today with the laying of the foundation stone for the Cuttack Netaji Bus Terminus begins the year-long celebrations of the 125th birth anniversary of Netaji. I am sure this bus terminus will achieve international status,” Naveen said in his keynote address on the special occasion.

Notably, the ultra-modern bus terminal is to be constructed on 12 acres of land at Khannagar at an estimated cost of Rs 65 crore. While 180 buses could be accommodated in it at a time, there will be information kiosks on Netaji and on showcasing the art and crafts of Odisha in the galleries and facades of the bus terminal having dedicated area for visitors’ parking, para-transit, service areas, pick up and drop-off zones.

Union Minister for Petroleum and Natural Gas, Dharmendra Pradhan paid tributes to Netaji by garlanding his statue at the Janakinath Bhavan in Odia Bazaar. Stating that the Centre has decided to celebrate the birth anniversary of Netaji every year as ‘Parakram Divas’, Pradhan said that Netaji’s valour andsacrifice will remain a source of inspiration for the younger generations for years to come.