Pandya handed over the Man of the Series award to Natarajan 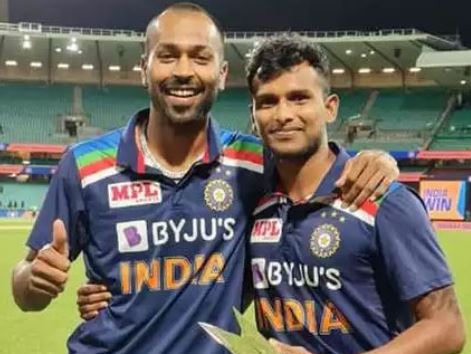 Hardik Pandya, the all-rounder of the Indian cricket team and made the Man of the Series of the T20 series against Australia on Tuesday, has handed over this award to the left-arm fast bowler T Natarajan of the team. Pandya was given the Man of the Series title for his outstanding performance in the T20 series against Australia. He played an important role in winning the series 2–1, thanks to his brilliant finish, in addition to scoring an important 78 runs and one wicket in three T20 matches.

Pandya shared a photo with Natarajan with her Twitter handle after the match. He wrote the caption with his photo, “Natarajan, your performance in this series was excellent. Performing such a good game while presenting for India in difficult conditions shows a lot about your talent and hard work. Natarajan bhai, from my side you are entitled to the man of the series. Congratulations on winning Team India. “

This message of Hardik Pandya went viral on social media and this post has received 91 thousand likes and 12.8 thousand retweets in just three hours. Natarajan made her debut in this series against Australia. He took a total of six wickets in three T20 matches. These are the most wickets taken by any bowler from both the teams. During this time, his economy rate was just 6.91.