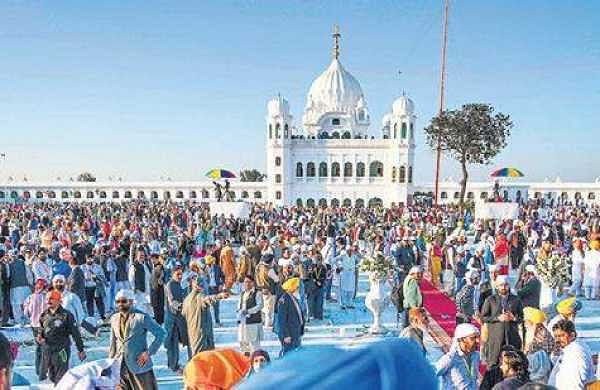 LAHORE: Pakistan’s top Sikh body and the Evacuee Trust Property Board (ETPB) on Tuesday welcomed the Indian government’s decision to reopen the Kartarpur Corridor, saying it will help Indian Sikhs to visit the last abode of Sikhism founder Guru Nanak Dev without any hindrance.

India on Tuesday announced the reopening of the Kartarpur Corridor from Wednesday.

The announcement to restart the pilgrimage that was suspended since March 2020 following the COVID-19 outbreak came three days before the birth anniversary of Guru Nanak Dev on Friday.

“We welcome the Indian government’s decision, which should have been taken a long ago. The decision will provide Sikhs from Indian Punjab an opportunity to visit the Gurdwara Kartarpur where Baba Nanak had spent the last 18 years of his life, Pakistan Sikh Gurdwara Parbandhak Committee (PSGPC) Pardhan (president) Sardar Ameer Singh told PTI.

“It is the basic right of the Sikhs to come to their holy places in Pakistan,” he said.

Singh further said the corridor should not be dragged into politics.

“A message of love and harmony should go from here. This will help reduce tension and improve ties between the two countries in days to come,” he said.

The bilateral relations between India and Pakistan have been affected badly over the Kashmir issue.

Singh said the PSGPC would host some 3,000 Sikhs due here on Wednesday in connection with the birth anniversary of Guru Nanak Dev.

“We can facilitate as many pilgrims at the corridor crossing over here from India, he said, adding that the corridor will bring the people of both countries closer one day.

The ETPB, which looks after the holy places of minorities in Pakistan, also welcomed the decision of reopening the corridor.

“We had been anticipating this decision long ago, but nonetheless it’s never too late and we welcome it,” ETPB spokesperson Amir Hashmi told PTI.

He said some 3,000 Sikhs will arrive in Pakistan from India via Wagah Border on Wednesday and many others from other parts of the world.

The main event will be held on November 18 at Gurdwara Janamasthan Nankana Sahib and all visiting yatrees would be taken to the Gurdwara Kartarpur Sahib as well.

In November 2019, Pakistan Prime Minister Minister Imran Khan had formally inaugurated the Kartarpur Corridor as part of commemoration of the 550th birth anniversary of Guru Nanak at a colourful ceremony, paving the way for Indian Sikh pilgrims to visit one of their religion’s holiest sites in Pakistan without needing a visa.

Sikhism founder Guru Nanak Dev lived and died at this gurdwara at the start of the 16th century.