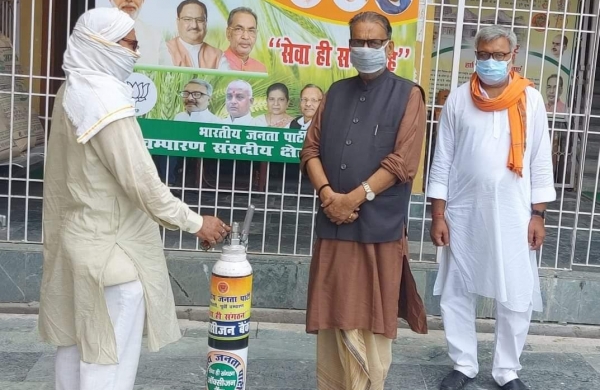 The oxygen bank was built with the help of local BJP MLA Pramod Kumar, who is the minister of sugarcane and law in Nitish Kumar-led state government.

This oxygen bank was started with 100 cylinders of various capacities at a time when the state was passing through an acute shortage of medical oxygen.

“Now, the lives of nearly 275 critical patients have been saved with the cylinders of oxygen supplied free of cost from this bank, which is now working under the supervisory role of local MLA Parmod Kumar and other volunteers”, Radha Mohan Singh claimed to the media on Thursday.

The former minister said that the oxygen bank has been set up in line with the commitment of BJP under the party social responsibility towards the propel infected with the Covid-19.

He told the media that the priority is accorded to the age of Covid patients, who are living at their homes in isolation far away from their working offsprings and other family members.

A helpline number has been flashed across the district through various information sharing methods like public addressing systems and local newspapers about the oxygen bank setup.

Singh said that the oxygen bank is playing the role of giving”pran vayu”(life air) to the people living in home isolation.

Md Azum Parvez said that his father at Jirat village was critical in need of oxygen recently and he got cylinders from this bank immediately. “You will be surprised to know that demand has increased and a huge number of calls are received. The people think that having made an arrangement for oxygen cylinders, one can save their lives from Covid”, said a local Manoj Kumar.

“With the opening of this oxygen bank, the people in need of it rush from dozens of villages with screenshots of oxygen levels of patients and one local guarantor to take the cylinders free of cost’, Pankaj Sinha, the in-charge of this oxygen bank said.

He said that prompt services are provided to hyper needy patients. “We are arranging more oxygen cylinders to continue the services of the bank further till the possible third wave”, Sinha said, adding that cylinders with various capacities including of jumbo size are available.