Over 2 lakh tractors will be part of January 26 ‘kisan parade’: Farmer leaders 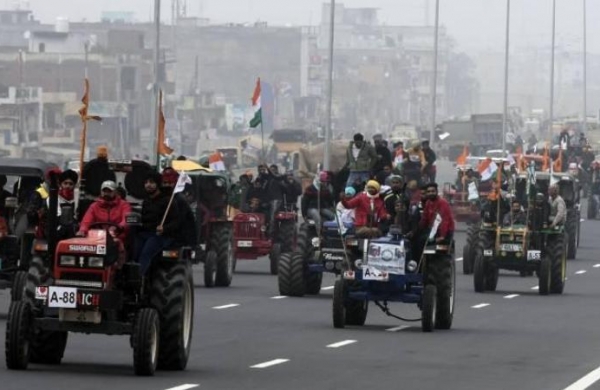 By PTI
NEW DELHI: Over two lakh tractors will be part of the January 26 ‘Kisan Parade’ in the national capital and around 2,500 volunteers will be deployed to facilitate the movement of the vehicles, farmer unions opposing the Centre’s new Agri laws said on Saturday.

The number of volunteers can be increased, depending on the crowd, and a control room has been set up to look into the arrangements, they said.

Kirti Kisan Union president Nirbhai Singh Dhudike, who presided over a meeting of Punjab farmers’ unions, said that more than one lakh tractors are expected to arrive from the state on Sunday.

The main focus of the meeting was to discuss the tractor parade to be taken on Republic Day, Singh said after the over three-hour-long meeting at Singhu.

Since November 28 last year, farmers, mostly from Punjab and Haryana, have been protesting against the laws at several Delhi border points, including Singhu, Tikri, and Ghazipur, and demanding the legislation be repealed.

The tractor parades will be taken out only after 12 pm, after the Republic Day parade on Delhi’s Rajpath concludes, according to the protesting farmer unions.

Farmer leader Abhimanyu Kohar, after attending a meeting between the unions and senior police officers on Saturday, claimed that the Delhi Police has given permission to the farmers’ tractor parade on January 26.

The tractor parade will start from the Ghazipur, Singhu and Tikri border points of Delhi, but the final details of routes are yet to be finalised, said Kohar, who is a senior member of the Sanyukt Kisan Morcha, an umbrella body of the agitating unions.

However, Delhi Police Additional Public Relation Officer Anil Mittal said, “We are in the final stages of talks with farmers.”

Dhudike said, “This is going to be a historic rally.”

“We will have around 2,500 volunteers who will part of the tractor rally on Republic Day. In case, anyone needs assistance or help during the rally, these volunteers will assist them. They will be responsible to ensure smooth movement of tractors in an organised and disciplined manner,” he said.

The volunteers will also attend to emergencies if any, the farmer leader said.

“Each volunteer will be given badges, jackets and identity cards. They will follow the tractors on jeeps. Some of them might even join farmers on tractors if required. They will also help in the distribution of essential items like water and edibles if needed. Each tractor will have a group of four-five farmers on it,” he said.

Under the central committee, there will be various sub-committees, including a traffic control team and a volunteer team, he said.

He also added that so far, it has been decided that 40 ambulances will be stationed along the route of the proposed tractor parade.