Over 1,000 militants lay down weapons in Assam 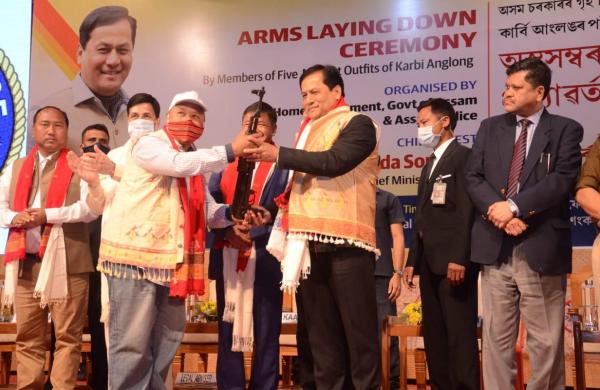 The rebels, belonging to five groups that were active mostly in the hill district of Karbi Anglong, declared a unilateral ceasefire with the government earlier.

Sonowal praised them for abjuring the path of violence.

“You have returned to the mainstream reposing your faith and trust in the Indian Constitution and democracy. We believe in peace and peaceful co-existence. We should work as a family for the state’s overall development,” he said addressing them at a programme in Guwahati.

“All communities in Karbi Anglong are living together peacefully. We have to continue this. The Central and the state governments will work sincerely for your rehabilitation. You don’t have to worry. Govt of India and Assam government will be with you,” the CM assured.

Stating that it is a remarkable day for India, he said people in the country believe in peace, coordination and unity. The peace-loving society does not want violence and conflicts, he said.

He said the Central government has many schemes for self-reliance. He said Rs 20 lakh crore, which Prime Minister Narendra Modi announced, would be spent in various sectors. His idea is to strengthen the financial condition of every family, Sonowal said.

“The government will come out with policies to engage you in various sectors. Karbi Anglong is known for its fine quality ginger, pineapple, orange, rubber, strawberry, turmeric etc. You will have to tell us how you would like to be involved and in which sector in the coming days,” the CM said.

He said the government’s focus would be on the district to enrich it.

“We have been able to restore peace in Assam due to the efforts of PM Modi and Home Minister Amit Shah. The outlook of the earlier governments was not clear,” he said.