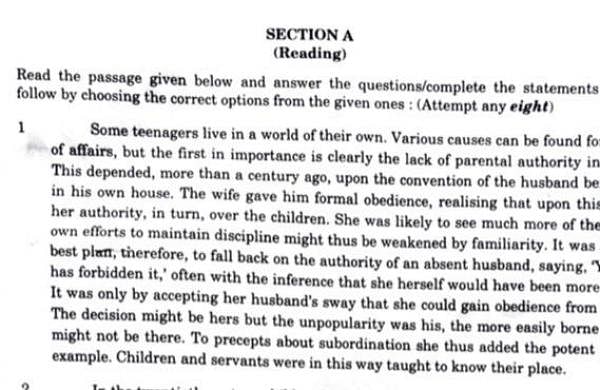 NEW DELHI: After a reading passage, part of the Central Board of Secondary Education class 10 English paper, containing text which many called was anti-women and against child rights, sparked outrage on social media on Sunday, the board said it will refer the matter to subject matter experts.

The text, shared widely on several social media platforms, was part of the reading section in the question paper—examination for which was held on Saturday- and was called out for being “anti-women” and expressing “regressive notions” about families and the role of women.

Congress’ general secretary Priyanka Gandhi Vadra, too, shared a copy of the question paper on microblogging site Twitter on Sunday and accused that the BJP government “endorsed” the views on women– as expressed in the passage.

“Unbelievable! Are we really teaching children this drivel? Clearly the BJP Government endorses these retrograde views on women, why else would they feature in the CBSE curriculum?” she wrote tagging the educational board under the Union education ministry and Prime Minister Narendra Modi.

“A passage in  one set of the English paper of CBSE Class X first term examination held yesterday has received mixed reactions from a few parents and students  stating that “it seems to support regressive notions on family and allegedly promotes gender stereotyping,” said the board in a statement.

The matter will be referred to subject experts for considered views as per the pre set procedures of the board, it also said.

“As regards the  correct answer option and the answer key   released by the board, it is clarified that if the experts opine that  the passage elicits multiple interpretations , appropriate action will be taken to protect the interest of the students,” the board clarified.

Earlier, another Congress MP, Jothimani, too had written to CBSE chairperson Manoj Ahuja expressing anger and shock about the particular text. She said that the question paper contained “Misogynistic, Anti-women, anti-child rights ideas” in her letter.

“I was shocked to read through the passages given in the reading comprehension section of the Grade 10 CBSE exams held on 11.12.2021,” she wrote in her letter to the CBSE head, highlighting some statements in the text like “The emancipation of the wife destroyed the parent’s authority over their children” and “children and servants were…taught their place”.