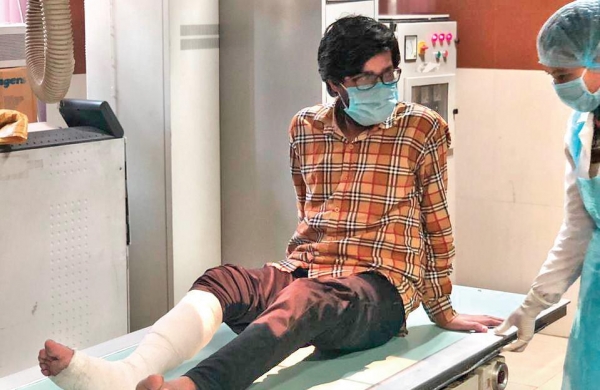 Express News Service
CHANDIGARH:  Dalit labour activist Shiv Kumar, arrested in January during the farmer protest, visited the Post Graduate Institute of Medical Education and Research (PGIMER) in Chandigarh for treatment a day after he was released on bail from Sonipat jail in Haryana.

Talking to this newspaper, Kumar, who is president of Mazdoor Adhikaar Sangathan, alleged, “I was tortured in the jail by the authorities thrice a day for a week and also mentally harassed. I was forced to stay awake at nights and was also was made to sign blank papers.”

Kumar said at PGIMER, a plaster cast put on his right leg after x-ray. He also underwent psychiatric screening. The activist later tweeted, “I have come straight from jail to Chandigarh hospital. There was a strong attempt to break my spirits in the jail but they could only end up breaking my leg. I have become stronger.”

In another tweet, he said he was “beaten, abused and tortured” in police custody and called Khalistani supporter. “But the struggle will not end here. I will be joining protests soon.” Kumar is an associate of activist Nodeep Kaur. Both were arrested in January on charges of extortion, theft and attempt to murder after they mobilised workers and staged a protest outside a factory that had not paid wages to workers.

On February 19, the Punjab and Haryana High Court ordered Kumar’s medical on a plea filed by his father alleging police brutality in jail. Kumar was examined on February 20 and the medical report prepared by a panel of doctors revealed that he had eight injuries, including fractures on booth feet, that were more than two weeks old and were caused by blunt weapon.

His psychiatric assessment done at that time revealed that he reported predominant anxiety symptoms, flashbacks of brutality meted out to him, nightmares, feeling of loneliness, uncertainty about future and sleep disturbance.