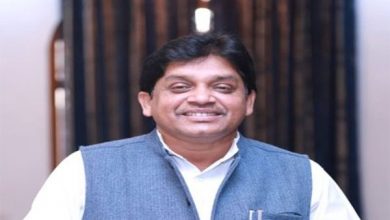 RAIPUR- Urban Administration and Labor Minister, Dr. Shivkumar Dahria today, through video conferencing at his residence office, is making efforts by the government to prevent the condition of corona infection in the state, arranging for the arrival of stranded laborers in other states and He gave detailed information about providing employment to the workers of the state. Minister Dr. Dahria said that under the leadership of Chief Minister Shri Bhupesh Baghel, the State Government is working with full capacity to deal with the situation of Corona infection. The state of Chhattisgarh has emerged as a model state of the country in the prevention of corona infection. In this challenging time of crisis, the Government of Chhattisgarh is working with full commitment to help the poor, villagers and the needy people of the city. Chief Minister Mr. Bhupesh Baghel has provided two months of free food grains to 56 lakh families of the state. Ration of the month of June is also going to be distributed free of cost. Those who do not have ration card. Food grains are also being provided to such families. In all gram panchayats, 2 quintals of rice have been kept to help the needy.

Minister Dr. Shiv Dahria further said that MNREGA works are being conducted on a large scale in ten thousand gram panchayats of the state. Through this, 20 lakh people in the state are getting employment every day. In urban areas also, construction works are being carried out, ensuring physical distancing. About 6 thousand small and big factories lying closed in lockdown have been started, which has started providing employment to local workers. He said that due to the lockdown, the state government has made arrangements for food, housing and health tests of workers of other states trapped in Chhattisgarh. Ration, housing and health arrangements of about 1.25 lakh workers of Chhattisgarh stranded in other states of the country have been coordinated by the Chhattisgarh government with the officials of the respective states. An amount of about one crore rupees has been deposited in the accounts of the needy workers. Minister Dr. Dahria said that liquor shops have been opened again in the state as per the directions of the Central Government. He said that instructions have been given to ensure strict adherence to physical distancing during liquor sale.

Answering the question of journalists, Dr. Shivkumar Dahria said that there has been a discussion with the Railways for arranging a train to bring stranded workers to other states. Workers will be brought to Chhattisgarh from those states as soon as the train is not available. The government will arrange for this. Dr. Dahria said that the government has also made arrangements for 14 days of quarantine for all the workers returning to the state. The state government has made arrangements for food, housing and medicine for workers in the Quarantine Center. He said that the students who had come back from Kota were kept in Quarantine. All health checks were done. On the request of children and parents, they have been allowed to do home quarantine. Quarantine information has also been posted at the residence of all the children. In view of the complaint of selling liquor at double the rate in the state, Minister Shiv Dahria said that action will be taken in any shop on receiving complaints of selling liquor at a higher price.

Minister Dr. Dahria also answered the questions of journalists regarding prevention of jaundice infection in Raipur city. He said that 80 MLDs for supply of clean drinking water in Raipur city. A new water filter plant of capacity is being set up. Five years ago Raipur city has lost 60 km of time. Due to leakage in the pipeline, there is an outbreak of jaundice in some areas of the city. The work of changing this pipeline is being done rapidly. So far, the pipeline has been changed up to 45 km. The remaining work is also being completed at the war level. He told that five high-level water tanks are being constructed in Raipur city for water supply. Water supply has been started by completing two tanks in Shyam Nagar and Ram Nagar (Gudiyari) of Raipur city. According to the intention of Chief Minister Mr. Bhupesh Baghel, a campaign is going on to make Raipur city a tanker-free city. The number of tankers has decreased by 40 percent this year compared to the previous years. Minister Dr. Daria while answering a question said that the government has constituted a committee at the social, political and administrative level for the imposition of liquor ban in the state. Decision will be taken based on the recommendation of the committee.

Dr. Dahria said that 27 crore rupees have been given from the Chief Minister’s Assistance Fund for the prevention of corona infection in the state. 20-20 lakh rupees have been given by the labor department to big districts, 10-10 lakh rupees to small districts to help the workers trapped due to the operation and lockdown. He said that due to the alertness and quick decision of Chief Minister Shri Bhupesh Baghel, the spread of corona in the state of Chhattisgarh has reduced compared to other states. As soon as Corona got its first positive case on March 19 in the state, Section-144 was imposed in Raipur. Public places such as libraries, gardens, water parks, gyms etc. were closed in urban bodies in the state from 13 March. The Government of Chhattisgarh exercised caution from the beginning, which is why the state is safe. He said that under the leadership of the Chief Minister, the fight to save from this epidemic, people of all sections of the society were against one unit.