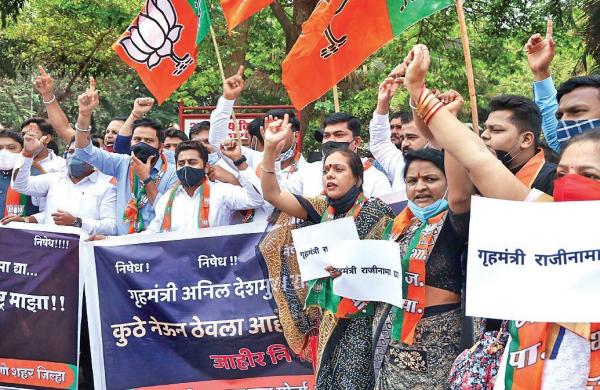 BJP held demonstrations in nearly 200 places in the state on Sunday demanding the resignation of Deshmukh and probe into the claim made by Singh in his letter to Chief Minister Uddhav Thackeray. Leader of Opposition Devendra Fadnavis called for a judicial inquiry. State BJP president Chandrakant Patil said protests would continue until Deshmukh steps down. Maharashtra Navnirman Sena president Raj Thackeray also demanded the resignation of Deshmukh.

A senior NCP leader, Deshmukh has denied the charges. State NCP chief Jayant Patil said the home minister has no reason to resign because of a yet unsubstantiated claim. He, however, added that a probe should be done to find out the truth. Days before writing to Thackeray, Singh was removed as commissioner and made in charge of a less important department.

“We demand that Deshmukh be sacked immediately and not brought back until a fair inquiry is done. Unless the home minister resigns, a fair inquiry will not be carried out. In Singh’s letter, NCP chief Sharad Pawar, CM Thackeray and Deputy CM Ajit Pawar have been mentioned. But the CM is not speaking on this matter,” Fadnavis said. Patil defended Deshmukh. “This is nothing but diversion tactics by the Opposition in the Mansukh Hiren death case,” he said.