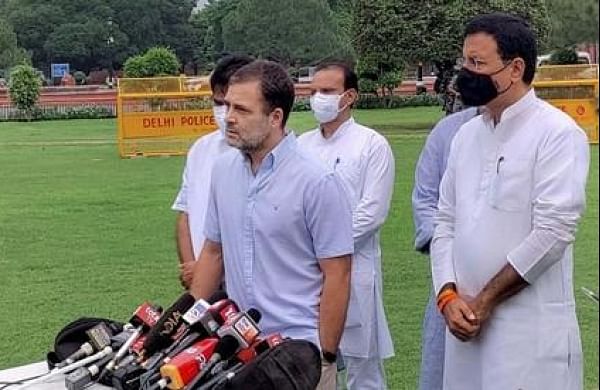 Express News Service
NEW DELHI: With the monsoon session of Parliament entering its third week on Monday, the Opposition will have a breakfast meeting on Tuesday where they will discuss ideas like organizing a mock session in the parliament compound and MPs staying on in both the houses after proceedings are over. The aim — to corner the government on the Pegasus issue since the Centre is not ready to take up discussion on the spyware.

The floor leaders of the Opposition parties in both Rajya Sabha and Lok Sabha have been regularly meeting to discuss strategies for each of the houses. Congress leader Rahul Gandhi has now taken it to the next level by inviting all the opposition MPs from both houses for a breakfast meeting on Tuesday at the Constitution Club of India to discuss future plans. The Monsoon session ends on August 13.

K Suresh, chief whip of the Congress in Lok Sabha, told The New Indian Express, “Rahul Gandhi has invited all the Opposition MPs for a breakfast meeting Tuesday at 9:45 am to discuss strategy to take on the government on key issues. Several ideas are on the table and will be discussed and finalized.”

Talking about the meeting, CPI(M) floor leader Elamaram Kareem said, “Many Opposition parties have given ideas to put pressure on the Modi government to take up discussion on key issues in the house. These include holding parallel parliament and staying on by MPs in both the houses.”

EDITORIAL | No place for Centre to hide on Pegasus snoopgate

The Opposition leaders feel the Centre is scuttling their voices by not allowing them to raise issues while legislative business is pushed through amidst the din.

Several Opposition MPs have been giving suspension of business notices under Rule 267 to discuss urgent issues but none have been accepted by the Rajya Sabha Chairman M Venkaiah Naidu or Lok Sabha Speaker Om Birla.

The “unofficial” parliament session is one of the innovative ways in which the Opposition wants to register its protest against the government. The Opposition MPs plan to discuss key issues like Pegasus, the ongoing farmer agitation and price rise among other issues here.

Kapil Sibal Column | Pegasus misuse: Over to the Supreme Court

The monsoon session of the Parliament so far has seen disruptions and repeated adjournments with a united Opposition taking on the Centre over the alleged use of Pegasus to snoop on politicians, judges, journalists, bureaucrats and others. The government has remained tight-lipped on whether it has bought the spyware.