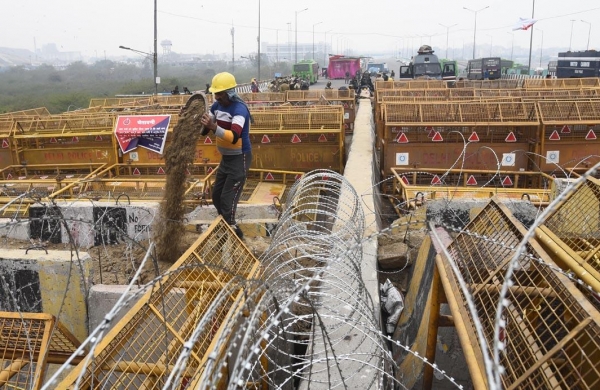 By PTI
NEW DELHI: Various opposition parties like the Shiv Sena, SAD, NCP, Samajwadi Party and Left parties on Friday demanded in Rajya Sabha that the three new farm laws be repealed and fresh ones brought after wider consultations.

Participating in the debate on the Motion of Thanks on the President’s address, the members of opposition parties attacked the government for dubbing the farmers protesting against the farm laws as “anti-nationals” and for “defaming” their agitation.

Shiv Sena MP Sanjay Raut alleged that anyone speaking the truth is dubbed as a “traitor” or “anti-national” and that cases of sedition have been slapped against those criticising the government.

Participating in the debate, he said farmers fighting for their rights have been branded as anti-nationals or Khalistanis.

He said the farmers, who were known as ‘warriors’ when they fought the Mughals and the British, are now dubbed as anti-nationals when they are fighting for their rights on Delhi’s borders.

Raut said farmers from Punjab, Haryana and western Uttar Pradesh, who are sitting on the borders of Delhi, are fighting for the peasants from across the country and demanded that their voice be heard and the farm laws be repealed.

“We heard minister Dharmendra Pradhan asking us to listen to the truth. For the last six years, we have been listening to the truth, even the untruth dubbed as truth.

The atmosphere in the country today is such that anyone writing the truth is dubbed as traitor and anti-national,” he alleged.

“When the farmers are uniting and fighting for their rights, you see anti-national acts.

They are not anti-nationals or ‘khalistanis’ “Till the time this movement is alive, the nation will remain alive and this ‘andolan’,” he said.

“If you would have built such barricades at the international borders, as those put up at Delhi borders, China would not have dared to come into Indian territory,” the Sena member said.

Praful Patel (NCP) said the Centre and states have together fought the COVID-19 pandemic along with medical professionals and the mortality rate in the country was low as compared to other countries.

He said when the government is talking of working for the welfare of farmers, why did it not send the farm laws to the Select Committee for wider consultations to avoid the situation that has arisen now.

“On our demand, had the government sent the bills to a Select Committee for wider consultations, the scenes witnessed today around Delhi would not have been witnessed.

What was the hurry to bring these laws,” he asked.

Patel sought to clarify that former Agriculture Minister Sharad Pawar’s letter of 2007 is being circulated to misrepresent the facts.

“The 2007 letter he wrote to chief ministers was to seek their comments on the amendment to farm laws.

The Bill was never brought in Parliament. The government, however, is unnecessarily raising the issue to misrepresent facts,” he said.

The NCP leader said if the government is ready to put these laws in abeyance for 1.5 years, why does it not repeal them and bring new ones after proper consultations.

BSP member Satish Chandra Misra demanded that the government should repeal the three new farm laws and also provide legal guarantee of the minimum support price (MSP) on all crops, alleging that the government’s intention are not clear.

Misra slammed the government for trying to stop farmers’ protest and alleged that multi-layered barricades, barbed wires and iron nails studded on roads have been put up on Delhi-borders.

He said water and electricity supplies have been cut and access to toilets have also been stopped.

“This is a human rights violation.”

“I am not able to understand when you (the government) are ready to suspend the laws for 1.5 years, what is stopping you to withdraw these Acts,” he said, urging the government to shed its ego and accept the farmers’ demand.

The Akali Dal member said the government should accept the farmers’ demand to repeal the three laws.

He said all Opposition parties are also demanding the same.

Dhindsa said he had written to the prime minister when Ordinances were brought but did not get any reply.

He said agriculture is a state-subject and the Centre is weakening the federal system by bringing these farm laws.

Highlighting the sacrifice made by Sikhs during the country’s Independence struggle, Dhindsa rued that Sikhs are being described as terrorists and Khalistanis.

Dhindsa also said there should be a scientific method to fix the MSP.

Congress leader Pratap Singh Bajwa demanded setting up a committee headed by a Supreme Court judge to conduct an impartial probe within two months into the incidents on January 26 that led to violence.

He compared the barricades set up at the farmers’ protest site at Ghazipur with the Berlin Wall and concentration camps, and took a strong objection to farmers being branded as anti-national and Khalistanis.

Earlier, CPI member Binoy Viswam hit out at the government for terming the economic crisis as an act of God, and said the policies of the government are squarely responsible for the situation and not the almighty.