Opposition bonhomie on display in Parliament over Pegasus row 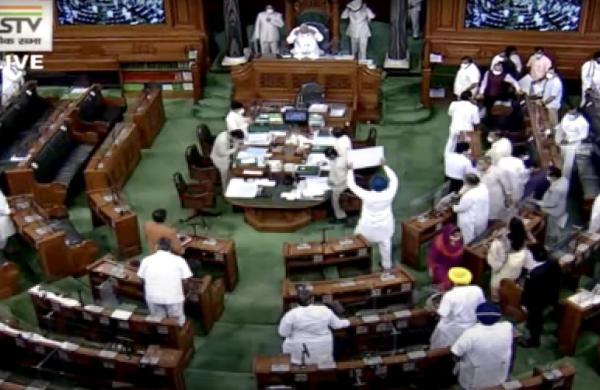 Express News Service
NEW DELHI: As talks of a united Opposition taking on the Modi government fueled by West Bengal CM Mamata Banerjee, the Opposition’s “unity” is on display in the Parliament during the ongoing monsoon session.

The Opposition parties are holding joint strategy meetings and backchannel talks and moving joint adjournment motions in both the Houses to corner the Center over the Pegasus spyware row.

Many Opposition leaders said that on the Pegasus issue, it will be a “united Opposition” Vs Modi government and they will continue with their demands for discussion on the matter in presence of the Prime minister or Home Minister and a probe by a Supreme Court-monitored committee.

Congress leader Rahul Gandhi, who does not generally attend Opposition meetings, has been in attendance for strategy meetings in the Parliament. AAP had otherwise not been part of joint strategy meetings and is also party to it on this issue.

It is also part of the strategy that “all the like-minded parties” will give adjournment motions on the issue in both the Houses. The floor leaders of the Opposition parties have been meeting almost every day to chalk out a strategy.

Leaders from 14 Opposition parties met Wednesday to discuss the future strategy to push the government for discussion on Pegasus row. The meeting of leaders from both the Houses was held in the office of Leader of Opposition in Rajya Sabha Mallikarjun Kharge in the Parliament.

“Sitting with the entire Opposition is extremely humbling. Amazing experience, wisdom and insight in everyone present,” Rahul tweeted after the meeting.

The parties which attended the meeting are the Congress, DMK, SP, CPI-M, CPI, NC, NCP, Shiv Sena, RJD, AAP, IUML, RSP, KCM, and the VCK. The TMC skipped the meeting on the grounds that Banerjee was meeting party MPs during the time.

Elamaram Kareem, CPI(M) floor leader in Rajya Sabha, said that the Opposition has taken a united stand on the Pegasus matter. “We stand together on this and on other major issues like repeal of farm laws and price rise. We have asked the Government to hold a formal meeting with the Opposition but there has been no response to ease the tension. They (Centre) are bulldozing bills without any discussion,” Kareem told The New Indian Express.

RJD Rajya Sabha MP Manoj Kumar Jha said that the Opposition is united keeping in mind the scale of the issue as it has encompassed everyone — judges, politicians, bureaucrats, ministers, and journalists.

What has united the Opposition parties this time is Pegasus spyware allegedly being used by the Centre to keep an eye on prominent politicians, judges, ministers, journalists, and others. The issue has been rocking the Parliament since it convened on July 19.