One year after Janata Curfew: Revisiting that long walk, a year on 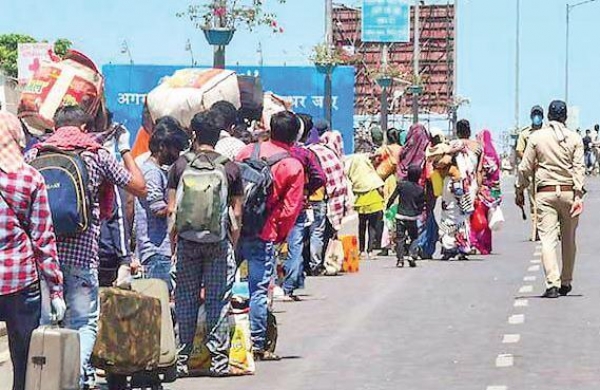 Express News Service
It was exactly a year ago, on March 22, that ‘Janata Curfew’ was imposed — a precursor to lockdown announced two days later that triggered a mass migration of the scale that India had not seen since Independence. Their livelihoods snatched in a single stroke, voiceless millions trod back home battling multitude of odds. TNIE revisits stories of some migrants, who made headlines back then for their sheer misery or extraordinary fortitude, to find how they or their families are doing

JAIPUR: Amid the tragic tales of labourers forced to walk hundreds of miles to reach home, a village in Rajasthan witnessed something different. A group of 54 labourers were provided shelter in a government school in Palsana village in Rajasthan’s Sikar district. In return for the hospitality of the locals, the labourers who lived there for over a month painted the school building. This token of gratitude won the hearts of the villagers, who continue to feel a special bond with those visitors a year on.

From Haryana, Madhya Pradesh and Uttar Pradesh, they were working as agricultural labourers in Jhunjhunu district when the lockdown was announced.  They were asked to isolate themselves in the school building.  During the 34 days they were there, locals provided them good arrangements.

In return for hospitality, labourers who lived there for over amonth during lockdown painted the school building.(Photo | Express)

Rajendra Kumar Meena, school principal, remembers that their ‘guests’ started with cleaning the campus and then came to him asking for work that would be remembered after they were gone.  Meena told them the school had not been painted for 10 years. The labourers wasted no time in saying they were game. “My colleagues agreed to fund a few buckets of paint. We bought other materials.

But for their free labour, our school would have remained in the same terrible shape it was in for over a decade,” says Meena. Sarpanch of Palsana, Roop Singh Shekhawat, remembers that local ADM Ashok Rinwa suddenly asked them to make arrangements for the workers at the school. Everyone pitched in despite the atmosphere of fear about the Covid at that time. Before the migrants left, a farewell was organised. They were gifted clothes, blankets and ‘safas’ (turbans).

That long walk, an year long