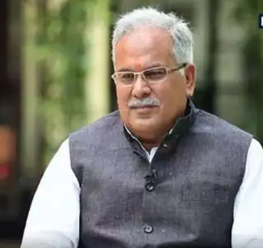 Chief Minister Mr. Bhupesh Baghel has said that the one-nation-one market ordinance of the central government is not in the interest of farmers. This will end the structure of the market, which is not beneficial for both farmers and traders. Most farmers are small marginal, this will increase exploitation of farmers. They do not have enough capacity to sell the produce outside the state. Farmers will not get the minimum support price for their produce. The Chief Minister further said that due to the amendments made by the Central Government in the Essential Commodities Act, there will be difficulty in taking action against the storage and price increase of essential commodities. Private companies will benefit from contract farming. With the entry of private sector in cooperatives, multinational companies, big industrialists will take over cooperative institutions and farmers will be exploited.
Chief Minister Mr. Bhupesh Baghel was addressing the program with the Chief Guest’s post after handing over development works worth Rs 332.64 crore to the Gorela-Pendra-Marwahi district through video conferencing from his residence office today. On this occasion, the function was chaired by the Speaker, Dr. Charan Das Mahant. All the ministers, Lok Sabha MP Smt. Jyotsna Mahant and other people’s representatives participated in the program through video conferencing.
Chief Minister Mr. Bhupesh Baghel said that the protection and well-being of common people is the priority of our government. We have inherited this inspiration. Following the policies and ideals of the first Prime Minister of the country, Pandit Jawaharlal Nehru to Lal Bahadur Shastri, Mrs. Indira Gandhi, the Government of Chhattisgarh is working for the betterment of the poor, laborers, farmers and tribals. He said that during the Corona disaster, the Government of Chhattisgarh has given direct assistance of Rs 70 thousand crore to the people through its public welfare programs and schemes.
The Chief Minister further said that today the country and the world are struggling with the Corona crisis. The national governments of many countries have achieved good success in the control of the disease by taking a sympathetic attitude towards the farmers, the poor and disaster victims. But the manner in which our country has done demonetisation, GST and lockdown by the way of surgical strikes, it has continuously worsened and the mixed effect has emerged as a national disaster in the Corona era. If the Central Government had a constructive and sympathetic attitude, the country would not have had to look at the days like today. The Chief Minister said that due to the constructive approach taken by the Chhattisgarh Government during the Corona period, we farmers, laborers, poor, villagers, forest dependents have been given 70 thousand crore rupees. Was able to help He said that I feel sad that even in this time of crisis, the efforts of our forefathers are forgotten.