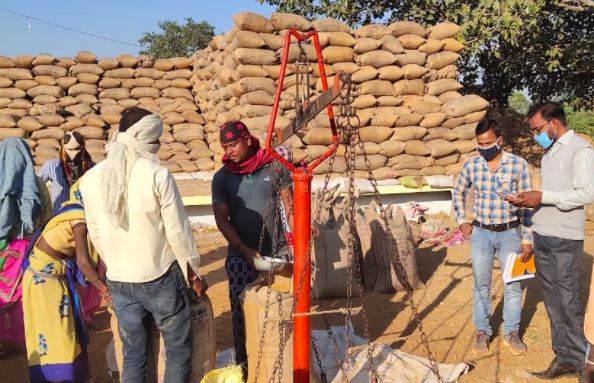 Records of 05 lakh 87 thousand 608 metric tonnes of paddy were purchased on support price in the Kharif marketing year 2020-21 in the district. As compared to last year, 11 thousand 965 more farmers have sold paddy. Under the guidance of Collector Shri Shiv Anant Tayal, proper arrangements were made to procure paddy in the district on support price. Nodal officers were appointed in each of the centers. Through whom monitoring work was being done daily. Food official said that in the district, a record 587608 metric tonnes of paddy was procured from 130180 farmers registered in this kharif season. While 526315 metric tonnes of paddy was procured from 111069 farmers on support price last year. Thus, 61293 metric tonnes of paddy was purchased in comparison to last year. It is a sign of a happy future for the agricultural farming growing in the agrarian Chhattisgarh state. Due to the farmer friendly policies of the state government, the area of ​​registration of paddy cultivation and the number of registered farmers has increased. Farming in the state got a support. People who have left agriculture are again getting attracted towards agricultural work.

Food official said that Rs.1015 crore 11 lakh has been paid to farmers in the district so far. He informed that in the Kharif marketing year 2020-21, 128799 hectares of paddy land had been registered in the district for the procurement of paddy at the support price. Nodal officer of District Cooperative Central Bank Maryadit Shri RK Vare said that online payment has been arranged in farmers’ account through 18 bank branches of the district. Farmers are withdrawing funds at their convenience.
District Cooperative Bank has 18 branches in the district – District Cooperative Central Bank operates 18 branches in Bemetara district, through which farmers have been transferred the amount of paddy procurement to their bank account. These branches include Bemetara, Jevra, Balasamund, Beard, Saja, Devkar, Berla, Dewarbija, Parpodi, Nawagarh, Nandghat, Sambalpur, Maro, Thelka, Thankhamharia, Bimbhori, Khandasra and Kehanka (Chechanmetta).