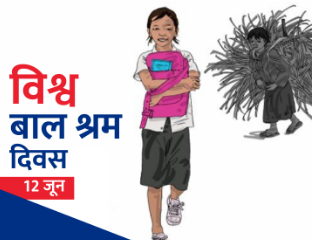 On the guidance and direction of Rajesh Srivastava District and Sessions Judge/Chairman District Legal Services Authority, Durg, with the joint combination of Labor Department, Women and Child Development and Police Administration, awareness program was conducted to stop child labor at various places of Durg district.
Shri Rahul Sharma Judicial Magistrate / Secretary, District Legal Services Authority, Durg informed that every year on 12th June, World Child Labor Prohibition Day is celebrated all over the world. Its main objective is to make people aware of the education of children below 14 years of age by not making them work. The Constitution of India, through various Articles of Fundamental Rights and Directive Principles of State Policy, states that no child below the age of 14 years shall be employed to work in any factory or mine or in any other hazardous employment. will be appointed. Children will be given opportunities and facilities to develop in a healthy manner, in independent and respectable conditions and childhood and youth will be protected from moral and material abuse.
The Child Labor (Prohibition and Regulation) Act 1986 This law prohibits the employment of children below the age of 14 years in 13 occupations and 57 practices which are considered to be injurious to the life and health of children. The Factories Act 1948 Act: A juvenile between the age of 14 to 18 years can be employed in a factory only if he has a fitness certificate from an authorized doctor. The law has fixed working hours of four and a half hours every day for children in the age group of 14 to 18 years and banned them from working at night.
Any person who employs a child below the age of 14 years or employs a child of 14 to 18 years in any hazardous occupation, shall be punished with imprisonment of either description for a term which may extend to six months to two years, and shall also be liable to a fine of Rs. Fine up to Rs 50,000 may also be imposed. The parents/guardians of the children cannot be punished for allowing their children to work in contravention of this law but if any child below the age of 14 years is made to work for the purpose of occupation or otherwise If a child between the ages of 14 and 18 is made to work in a dangerous occupation or process, this immunity does not apply and can be punished. Apart from these laws, there are other such Acts (such as Factories Act, Shipping Act, Motor Transport, Labor Act etc.) under which there is a provision of punishment for employing children but prosecution for the offense of child labor is done under the Child Labor Act. Will be under
A bond of hope was also filled from the traders and contractors from the people. In future, they will never get the work done for children below 14 years of age and if anyone sees them doing work for children below 14 years of age, they will be stopped and complain will be made.
The most important way to stop child labor is to spread awareness against child labor so that people understand that child labor is playing with the future of the country. They have to be told that the future of India, which lies in the children of India through child labor, is becoming mentally and physically weak. Another way to stop child labor is the promotion of education because the illiterate person does not understand child labor. If education is spread, then child labor will be stopped and people will be aware of child labor. Shri Lokesh Patel, Judicial Magistrate First Class, PLV of District Legal Services Authority, Labor Department officers and police officers were present in this event.