On visit to UP, Amit Shah coins acronym ‘JAM’ to take dig at Akhilesh over Jinnah statement 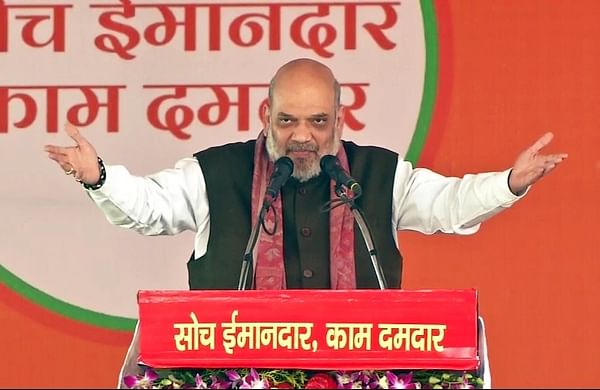 LUCKNOW: Taking a dig at the opposition, especially the Akhilesh Yadav-led Samajwadi Party, Union Home Minister Amit Shah coined an acronym ‘JAM’ to prove a point that while PM Modi used it to eradicate corruption in the country through Jan Dhan account, Aadhaar card and mobile phones, the previous Akhilesh government redefined it by showing his liking for Jinnah, Azam Khan and Mukhtar.

The Home Minister, who was on a two-day visit to Purvanchal in Uttar Pradesh, put forth his thoughts during two back-to-back public rallies in Azamgarh and Basti.

In Azamgarh, Shah laid the foundation stone of a state university named after popular Rajbhar king Suheldev, while in Basti, he inaugurated the Sansad Khel Mahakumbh.

“We brought in JAM — J for Jan-Dhan account, A for Aadhaar card, M for mobile phones, Samajwadi Party also claimed to have brought a JAM. It stands for Jinnah, Azam Khan and Mukhtar (Ansari),” Shah said while addressing a rally in Azamgarh.

Shah’s remark comes close on the heels of the SP chief’s controversial statement on Mohammad Ali Jinnah where he had compared the Muslim League leader with Nehru, Mahatma Gandhi and Sardar Patel saying his contribution tothe country’s freedom struggle was equally great.

Shah accused Akhilesh of appeasement in a veiled attack saying that as the UP assembly polls were inching closer, Akhilesh Yadav’s liking for Jinnah was also surfacing and he was glorifying the leader who played a key role in the nation’s partition.

Shah also took a swipe at the previous regimes saying during their governments, Azamgarh became infamous as a safe haven for terrorists. “Azamgarh, which was portrayed as the nursery for terrorism during previous governments, will soon become a temple of Goddess Saraswati and a seat of education for the youth of eastern UP,” said Shah.

The Home Minister invoked Maharaja Suheldev during his speech as the one who fought against the invaders to make the land free.

Moreover, the state government decided to name the university, the foundation stone of which was laid by the Home Minister on Saturday, after Maharaja Suheldev in political symbolism to woo the Rajbhar community which makes around 12 per cent of the electorate in the eastern region. The community has a sway in over 60 seats of eastern UP.

It may be recalled that the Suheldev Bharat Samaj Party (SBSP), led by OP Rajbhar, had contested the previous assembly election in alliance with the BJP and had bagged four seats for the first time. However, this time Rajbhar has tied up with the Samajwadi Party (SP).

At the same time, Shah also patted the back of UP CM Yogi Adityanath for proper implementation of central schemes, apt COVID management and leading the state on the path of development during his speeches at both Azamgarh and Basti.

He listed out the parameters of development including the state’s GDP which he claimed had gone up from Rs 10 lakh 90,000 crore to over Rs 21 lakh crore. “Similarly, during the last five years, the unemployment rate has come down from 17.5 per cent to 4.5 per cent,” claimed Shah.

Both in Azamgarh and Basti, Shah appreciated the Yogi government over the law and order situation saying CM Yogi had rid the state of ‘mosquito and mafia’. “While JE, which used to devour many lives in the past, is no more a menace, the mafia have been forced to take refuge outside UP under the Yogi government,” he added. In Basti, Shah was all praise for CM Yogi for making the state riot-free during the last five years of his governance.

The Home Minister then gave a religious colour to his discourse saying, “SP, BSP and Congress used to mock us over the construction of the Ram temple in Ayodhya. They can now see that a Ram temple is taking shape in Ayodhya in all its grandeur.”

Shah also mentioned that it was due to the grit and determination of PM Modi that Article 370, the removal of which had been promised and part of the BJP manifesto since the times of the Jan Sangh, was abolished making Kashmir an integral part of the country in the true sense.

Earlier, the Union home minister participated in the Akhil Rajbhasha Sammelan in Varanasi where he urged the people of the country to use Hindi more and more in their conversation to make it more popular as it was the pride of the country.

“I like Hindi more than Gujarati. It is such a beautiful language. We all should take pride in using it as the national language in our daily conversation. We should never feel ashamed of the language which is a part of our rich cultural heritage,” said Shah.