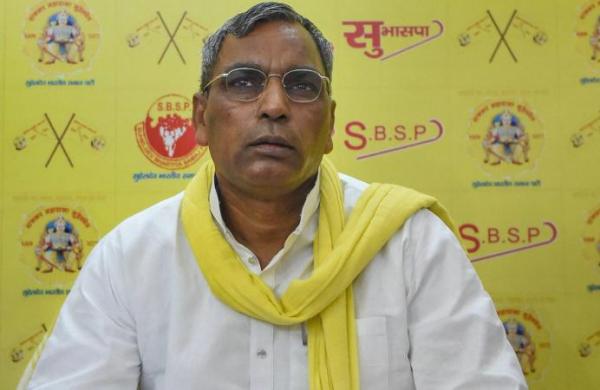 By PTI
BALLIA: President of the Suheldev Bharatiya Samaj Party, Om Prakash Rajbhar, on Sunday said that he is trying to bring TMC chief Mamata Banerjee, AAP leader Arvind Kejriwal and Shiv Sena president Uddhav Thackeray on a common platform, and form an effective front to counter the BJP.

The SBSP had contested the 2017 Uttar Pradesh Assembly elections in alliance with the BJP but later parted ways.

Assembly polls in Uttar Pradesh are slated for early next year.

“Yesterday, I met Aam Aadmi Party leader and Rajya Sabha MP Sanjay Singh, and his approach was positive. He has given in-principle approval to be a part of the Bhagidari Sankalp Morcha. The final decision about joining the morcha will be taken by Kejriwal. In this regard, there will be a meeting with Kejriwal in Delhi next week,” Rajbhar told PTI.

When asked whether Kejriwal is ready to join the morcha despite the presence of Asaduddin Owaisi’s AIMIM, the SBSP chief said, “The need of the hour is to stop the BJP. If the BJP can join hands with Mehbooba Mufti, then Kejriwal and Owaisi too can come on the same platform to stop the BJP.”

Rajbhar said his “effort will be to bring TMC chief Banerjee, and Shiv Sena president Thackeray on a platform, and form an effective front to counter the BJP.”

The SBSP chief said he has already held talks with Shiv Sena leader Sanjay Raut and a general secretary of the Trinamool Congress.

“Raut is likely to visit Lucknow soon, and decisive talks in this regard will be held with him,” Rajbhar said.

In the 2017 Assembly elections, the SBSP contested eight seats and won four.

Rajbhar was made a Cabinet minister but he resigned later.