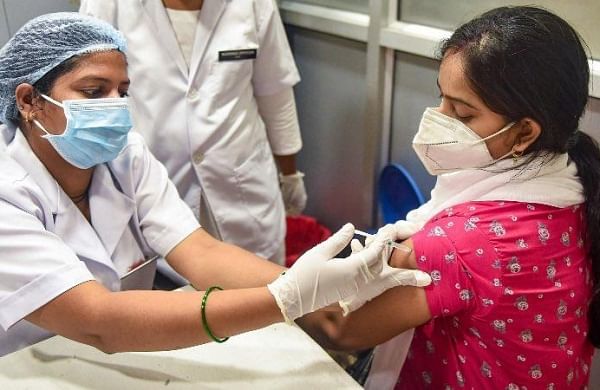 LUCKNOW: Facing the daunting task of holding a Covid-safe election in Uttar Pradesh, officials are working overtime to achieve the target of fully vaccinating at least 90 per cent of the eligible population before the first phase polling on February 10.

The state election office intends to ensure 100 per cent inoculation of officials and security personnel to be deployed for the seven-phase polls in the state ending on March 7.

The results will be declared on March 10 along with other four poll-bound states — Punjab, Uttrakhand, Goa and Manipur.

Entrusted with the big responsibility, Chief Minister Yogi Adityanath holds a review meeting on the coronavirus situation daily and gives necessary instructions on testing and vaccination.

“We are aiming to ensure the eligible population gets at least one dose by January 25,” Additional Chief Secretary Navneet Sehgal told PTI-Bhasha.

So far 63 per cent of the targeted population has received two doses of vaccine and the effort is to scale it up to at least 90 per cent by the time the state witnesses the first round of voting on February 10, said Sehgal, who is also the nodal officer on COVID-19 in the state.

The officer said around 97 per cent of the 18-plus population has got their first dose of the vaccine by now.

On an average 25 lakh people are administered vaccine daily as part of a speed-up inoculation drive.

Adityanath has asked officials to increase it to 30 lakh a day.

Uttar Pradesh Chief Electoral Officer Ajay Kumar Shukla told PTI-Bhasha that more than 7.5 lakh officials would be deployed on poll duty and efforts are on to fully vaccinate them beforehand.

Immediately after declaration of the voting schedule, all the district magistrates and superintendents of police were directed to ensure that those put on election duty are fully inoculated, Shukla said.

“No official will be put on election duty without them receiving both doses of jab. Treated as frontline Covid workers, they are also being given the additional precautionary dose of vaccine,” he said.

Those on poll duty would have to undergo thermal scanning before they set out for the work and if any health problem is spotted they would be taken off duty.

There would be sufficient arrangement of masks and sanitiser for them at the polling centres, Shukla said.

The state’s poll panel head said all the polling booths would be totally sanitised beforehand and COVID-19 protocol would be adhered to strictly.

By January 8, around 88.98 per cent of the population had received the first dose and 52.71 per cent got both doses in Uttar Pradesh.

The state has since expedited the vaccination exercise and the number of inoculated population is increasing fast, according to state health department sources.

According to the state government’s latest statement, 2.41 lakh COVID-19 testing was conducted in the last 24 hour, out of which 16,412 were found positive.

During the period, 17,600 infected people recovered.

More than 70.52 lakh citizens in the 15-17 age bracket have been inoculated so far, the statement said.

Over 50 per cent of the population in this new target group has been administered a dose.

Uttar Pradesh on Friday reported 22 coronavirus deaths as 16,142 fresh cases surfaced, pushing the state’s infection count to 19,16,616, according to a government statement.

So far, 23,022 people have died from the infection in the state.

Of the fresh deaths, two each were reported from Lucknow, Meerut, Lakhimpur Kheri, Chandauli and Ballia, the statement issued here on Friday said.

The count of active COVID-19 cases in the state stands at 95,866, the statement said.

In the past 24 hours, more than 2.41 lakh samples were tested for COVID-19, the statement said.