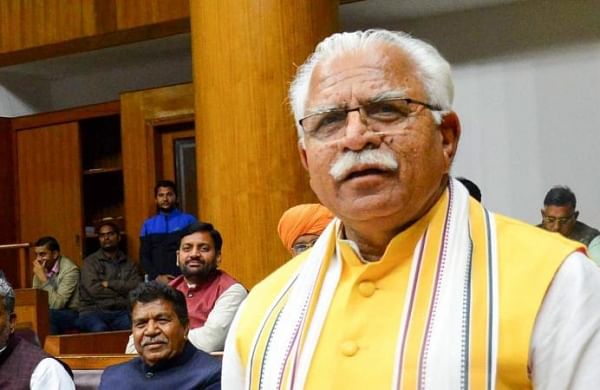 CHANDIGARH: With several Hindu outfits objecting to Friday prayers being offered in open spaces in Gurgaon, Haryana Chief Minister Manohar Lal Khattar said the practice of offering ‘namaz’ in the open “will not be tolerated”.

He also said that the district administration’s prior decision to reserve some spots for holding prayers in open spaces has been withdrawn and the state government will now work out an amicable solution to the issue.

“The practice of offering namaz here (Gurgaon) in open spaces will not be tolerated… But we all will sit to find an amicable solution. Everyone should get the facility (to offer prayers), but nobody should infringe on others’ rights. It will not be allowed,” the chief minister told reporters in Gurgaon, responding to a question on the objections raised by several right-wing outfits to offering ‘namaz’ in open spaces in the NCR city.

On withdrawing the district administration’s decision to earmark some places for holding prayers in open spaces, he said, “We have told the police and the Deputy Commissioner that this issue has to be resolved…If somebody offers namaz, holds paaths at one’s place we have no objection to that. Religious places are built for this very purpose that people go there and offer prayers.”

Over the past some months, members of some Hindu outfits have been gathering at sites where the Muslim community offers ‘namaz’ in open space, and raising “Bharat Mata Ki Jai” and “Jai Shri Ram” slogans.

Three years ago, the district administration had designated 37 sites in Gurgaon city for Muslims to offer Friday namaz after which there were protests by some Hindu groups. A few months ago, one group started protests against the prayers offered in the open after which there have been protests on Fridays for the past several weeks.