Of tractors and detractors: BJP top brass silent on rally that turned unruly 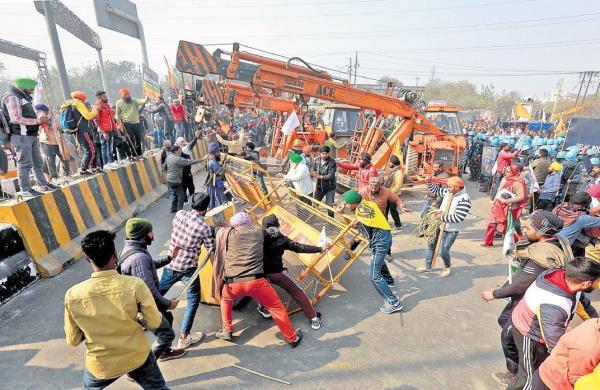 Express News Service
NEW DELHI:  The government and the BJP were guarded on the turn of events during the tractor rally. Prime Minister Narendra Modi, Home Minister Amit Shah and BJP president JP Nadda refrained from making public comments till late on Tuesday.

It was learnt that Shah was being briefed about the situation by senior officials. There were only a few voices from the BJP against the Red Fort incident, where a protestor raised a Nishad Sahib flag amid skirmishes with police personnel. The silence of senior leaders and top ministers was a departure from the past, when they aired their views on various issues on social media.

Union Minister for Culture and Tourism, Prahlad Patel was among the few to speak out. “Red Fort is the symbol of our democracy. The protestors should have stayed away from Red Fort. I condemn the violation of the sanctity of Red Fort. This is sad and unfortunate,” he tweeted. Agriculture minister Narendra Singh Tomar and Railways Minister Piyush Goyal were among other prominent names silent.

Former BJP vice-president Vinay Sahasrabuddhe blamed the Congress, saying that they irresponsibly supported the farmers. “Populism is a phenomenon exploited to the hilt by the Congress and its allies at the cost of the nation,” tweeted Sahasrabuddhe.BJP’s former general-secretary P Muralidhar Rao also took to Twitter to criticise the Red Fort incident.