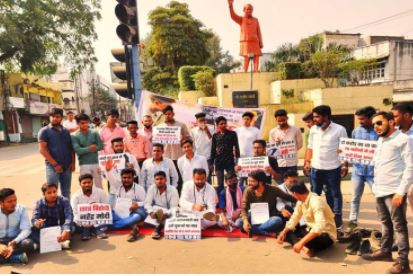 On the occasion of Youth Day, Raipur District NSUI polished the shoes of the general public at Rajiv Gandhi Chowk and opposed the Modi government. The protest was held in protest against not fulfilling the promise of providing employment to 2 crore youth every year till date. Under the leadership of President Amit Sharma, the people of Raipur were polished and a protest was registered. Sharma said that every student is plagued by unemployment today. He said that every student’s foster educates him by spending millions and the Prime Minister of the country Narendra Modi says that sell pakoras, sell tea, polish shoes, then when all this had to be done, why should parents read to their children The Hundreds of activists were present in the program, mainly Shaan Saifi, Hemant Pal, District General Secretary Hariom Tiwari, Nikhil Vanjari, Bhupesh Verma, Mehtab Hussain, Sankalp Mishra, Pushpendra Dhruv, Sheikh Imran, Ankit Sharma, Seva Sahu, Yash.