Not to indulge in politics over CM’s injuries, want probe: BJP on visiting Mamata at hospital 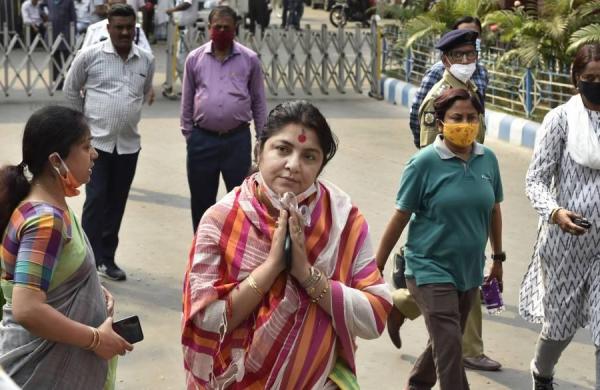 By PTI
KOLKATA: A day after West Bengal Chief Minister Mamata Banerjee was admitted to a facility here after receiving injuries during her Nandigram visit, the Bengal BJP said the party will not indulge in any politics over her injuries but will demand a comprehensive probe into the incident since she had alleged conspiracy behind it.

Noting that the fight with the TMC is a political one and on ideological and development issues, BJP spokesman Samik Bhattacharya wished her a speedy recovery and said, the party hoped for her return to the electoral arena as soon as possible.

“We will not do any kind of politics over the chief minister’s injuries. We pray for her early recovery and return to the political stage,” he told a press conference at the BJP headquarters here.

According to information received by the BJP state leadership from local party workers and eyewitnesses, it was an accident, but a high-level inquiry is necessary when the chief minister herself has claimed that it was a conspiracy, he said.

Soon after the incident at Birulia bazar in Nandigram on Wednesday evening, the TMC supremo had claimed that it was an “attack”.

Banerjee, who filed her nomination papers for Nandigram assembly constituency before the incident, had alleged that she was attacked by four or five people who pushed her, besides banging on her the door of the vehicle, injuring her left leg, waist, shoulder and neck as she fell on the ground.

She was rushed back to the city and was admitted to state-run SSKM hospital in south Kolkata, less than a couple of kilometres away from her residence.

“We demand a comprehensive investigation into the incident since the chief minister has claimed that it is a conspiracy and not a mere accident,” he said.

The BJP spokesman and party leader Tathagata Roy, a former governor of Tripura and Meghalaya, went to the hospital on Thursday morning to visit the chief minister.

He said, they chose not to react after TMC supporters raised “go back, BJP hai hai” slogans when they went to the hospital.

“They may have done it out of temporary excitement, but such behaviour is not welcome inside hospital premises when a political worker goes to meet the chief minister of the state to wish her speedy recovery,” Bhattacharya said.

He said they were told by the hospital authorities that visitors were not being allowed to meet her since she was undergoing treatment in her cabin.

“We conveyed our concern to the TMC leaders present, including minister Arup Biswas, and wished the chief minister a speedy recovery,” Bhattacharya said.

He said, the chief minister avails Z-plus security and there are at least 12 vehicles in her convoy.

Banerjee had said that there were neither any police personnel nor the Purba Medinipur police superintendent present near her.

Bhattacharya said, if the chief minister faces such a situation despite having a three-layered security, then there is need for a comprehensive inquiry and fixing of responsibility for any lapse.

The BJP leader questioned how could anyone reach near a leader of Banerjee’s stature breaking the security cover, when the director and additional director, security, were present.