Not even fear of Covid-19 can disrupt protests, say farmers protesting against new agriculture laws 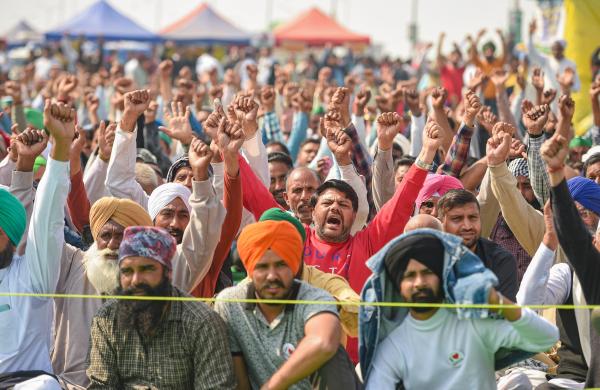 By PTI
NEW DELHI: The alarming rise in the number of COVID-19 cases in Delhi notwithstanding, farmer leaders on Thursday said that nothing, not even the fear of coronavirus, can disrupt their protest against the agri laws.

Over the past four months, the farmers have managed to keep their agitation going, withstanding extreme cold, rains, and heat.

They devised many ways to deal with these issues – for cold there was ample supply of winter wear, for rain they elevated their beds, and to prepare for the heat, they have started building houses, and arranging for ACs, coolers and fans.

Tackling the second wave of COVID-19 won’t be very different for them, they said, adding they are prepared with certain basic precautions in place.

“We have been making announcements from the stage at the Singhu border about the necessity of wearing masks, and washing hands frequently.

We are also encouraging the protestors to get vaccinated,” said Lakhbir Singh, vice president (Punjab) of All India Kisan Sabha.

With multiple health camps at these protest sites, immediate medical assistance is always at the farmers’ disposal in case a protestor develops symptoms like fever or breathlessness.

“If somebody has fever or cold, or any other COVID-like symptoms, then the doctors here take a call. The patient is either admitted to a hospital, or sent back to their village for 8-10 days,” said Jagmohan Singh, general secretary of the Bharatiya Kisan Union (Dakaunda).

Delhi too, recorded 7,437 fresh cases in its highest single-day spike this year, with the capital’s death roll reaching 11,157 on Thursday.

According to Swaraj India president Yogendra Yadav, farmers do treat the pandemic with a “certain indifference”, but also pointed out that none of the protest sites were COVID-19 hotspots either, making it difficult to challenge the farmers’ attitude.

“If you would notice, each of these places has doctors, clinics. They are not doing COVID testing, but if many people are reporting fever and so on, they would get to know because qualified doctors are there in every single morcha.

“Some of them have proper hospitals. If there was a surge in fever and breathlessness that would have been noticed immediately,” he said.

He added that while the habit of wearing masks and washing hands was being cultivated among the farmers, “distancing has not worked”, which, he added, was true for most places in the country.

One of the major threats that seems to loom over the farmers movement with the rising number of COVID-19 cases, is the repeat of what happened to the Shaheen Bagh protest last year – they were forced to end the agitation fearing the spread of the disease.

This year, Yadav said, however, the situation was different.

“That time, there was a sense of doom, a sense of ‘you don’t know what would happen’ with corona. It was just the beginning we didn’t know anything at that point.

“Now, that unspecified sense of doom is not there, and therefore, while at that time the government could use that as a pretext to get the protestors to move away, using that now would be utterly cynical,” he said.

He added that if the government uses the coronavirus as an excuse to remove the protesting farmers, it would only expose their “hypocrisy” with the election campaigning underway in West Bengal.

“In that case they should ban election campaigning in Bengal. The first thing they should do is to ban BJP’s own rallies, where the home minister is addressing the crowds. The hypocrisy of that would obviously be seen,” Yadav said.

Thousands of farmers from different parts of the country have been protesting against the three farm laws since the last week of November, 2020.

While the government has been projecting these laws as major agricultural reforms, farmers have expressed apprehension that the move would lead to the elimination of the Minimum Support Price system, and leave them at the mercy of big corporates.

Ask Paramjit Singh if the farmers are afraid of contracting the disease that has already claimed over 1.6 lakh lives in the country, and he said, “what choice do we have?” “Our lives are already on the line.

“We are taking precautions at individual levels by wearing masks and avoiding shaking hands with people, but the movement has to and will continue,” the Bhartiya Kisan Union (Lakhowal) Punjab general secretary said.