No let up in COVID cases in Bengal; Trinamool MP Mausam Noor infected for second time 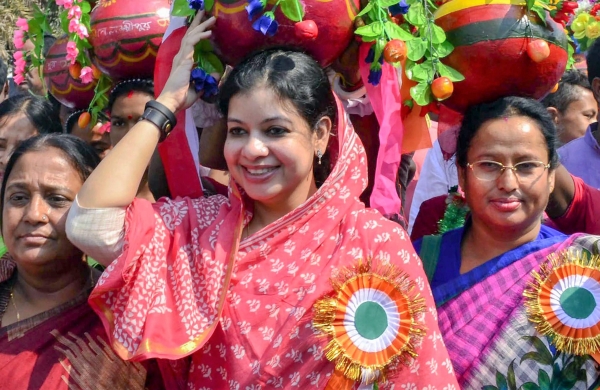 By PTI
KOLKATA: With three more rounds of voting left, the West Bengal on Tuesday registered its highest-ever single-day spike of 9,819 COVID-19 cases, taking the tally to 6,78,172, state health department said in its bulletin.

The number of new infections in a day has more than doubled since April 13, the bulletin noted.

At least 46 more people succumbed to the infection, pushing the toll to 10,652.

Noor, who had tested positive for the contagion last year also, has been advised to go for home isolation, health department sources said.

North 24 Parganas district accounted for 15 deaths, while the city registered 13 fatalities, it said.

In Malda there were 4 COVID-19 deaths, while two each were recorded in Hooghly, Howrah, Paschim Bardhaman districts.

There was one death each in South 24 Parganas, Purba Medinipore, Purulia, Nadia, Murshidabad, Jalpaiguri, Kalimpong and Darjeeling, the bulletin stated.

Continous surge in coronavirus cases is a cause of worry for the West Bengal which is witnessing assembly elections.

Out of eight-phase polls, five are over and three legs are left.

The sixth phase of voting is on Thursday.

The last two rounds will take place on April 26 and April 29.

Results will be declared on May 2 along with other three states and the Union Territory of Puducherry.

Out of the 46 deaths, 32 were due to the co-morbidities, where COVID-19 was incidental.

Since Monday, 4,805 recoveries have been recorded in the state, with the discharge rate currently standing at 89.82 per cent.

Till Tuesday, 6,09,134 people have recovered in West Bengal, the bulletin said.

Accordingly, the number of active cases has risen to 58,386, the bulletin stated.

As many as 50,044 samples have been tested in West Bengal in the past 24 hours which pushed the total number of such clinical examinations to 99,00,322, the department added.

On Tuesday, the state lost one doctor, first this year, to the disease, a state health department official said.

Dr Anup Mukhopadhyay (55), who was in-charge of the medical store in ESI Hospital Joka died at the Kolkata Medical College and Hospital, he said.

“The doctor had certain co-morbidities other than kidney ailments. He underwent dialysis on Monday but could not continue his fight against the disease and passed away on Tuesday evening,” the health department official said.

So far, cumulatively 92,07,183 people have been inocultaed in West Bengal, he said adding that three minor AEFI cases were reported during Tuesday’s vaccination programme.

Meanwhile, the state government on Tuesday decided to increase the bed count at each state-run hospital by 25 per cent.

The decision was taken at a meeting chaired by chief secretary Alapan Bandyophyay and other senior officials of the state government.