No difference with China, Pakistan, historical ties with India: Bangladesh 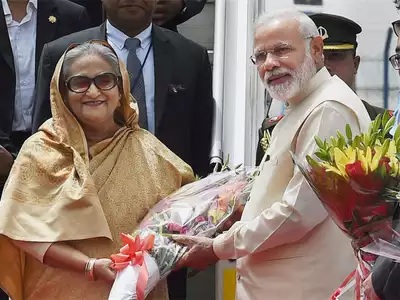 India-Bangladesh relations: Bangladesh Foreign Minister has claimed that its relations with China and Pakistan will not affect bilateral relations with India. He has given silence on the Ladakh tension, a phone call to Imran Khan’s PM Sheikh Hasina, and clarification about Hasina’s absence from the Indian High Commissioner.

Dhaka
Bangladesh Foreign Minister Dr. AK Abdul Moman has dismissed reports that claimed that relations between Bangladesh and India have started to come away. In fact, a few days ago a leading Bangladeshi newspaper claimed that Prime Minister Sheikh Hasina was not giving time to meet India ‘s High Commissioner Rewa Ganguly Das for four months. On this, Moman said that Bangladesh is a friend of all and has historical relations with India.
Misconceived information
Moman has clarified that Hasina has not met any foreign ambassadors who have gone back to their country. He has also said that PM Corona has not met anyone due to the virus epidemic. She is currently holding a cabinet meeting through video conference. Moman has said that the information coming out about this is completely wrong and concocted.

‘does not matter to anyone’
Moman has also refuted the claim that Hasina’s postponement of India’s High Commissioner has the effect of increasing closeness with Pakistan. Let me tell you that some time ago, Imran and Hasina had a conversation on the phone. Moman has said that this will not affect the bilateral relations between India and Bangladesh. Moman has said, ‘We are a peace loving country and we are everyone’s friend, not anyone’s enemy. Bangladesh has had close ties in history with India. Someone’s call or someone doing something will not affect their relationship. ‘

‘So silent on Ladakh’
On the other hand, Bangladesh also did not give any statement on the tension that has remained in Ladakh in India in the past weeks. Moman also dismissed claims that Bangladesh had maintained silence due to its proximity to China. Moman said that the Indian government did not formally give information about the martyrs. He said that both countries did not seek support from Bangladesh, so he remained silent. He has also said that the situation requires that peace and stability be maintained.