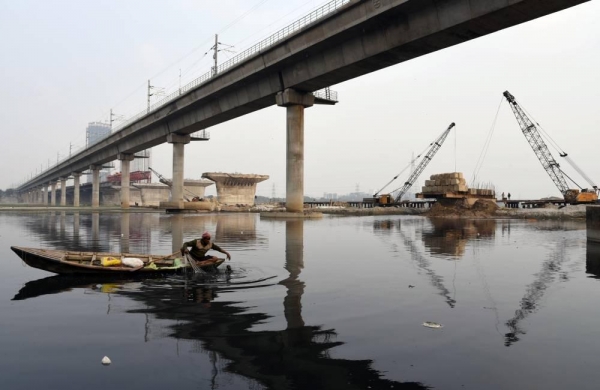 By PTI
NEW DELHI: Members of a National Mission for Clean Ganga (NMCG) team met Delhi Jal Board (DJB) officials and observed that the progress in all the projects has been significant compared to the situation at the time of previous review meetings, the Jal Shakti ministry said on Wednesday.

An NMCG official said the meeting took place on Monday.

The NMCG is working on rejuvenating not only the Ganga but also its tributaries and sub-tributaries.

The DJB is executing these projects in the Yamuna.

“The Namami Gange team met Delhi Jal Board executives to review the progress of various projects in Delhi. It was observed that there was a significant progress in almost all projects in comparison to the previous review meetings,” a statement said.

Two major projects related to sewage management have been completed, including the rising main (the pipeline carrying the pump discharge of water to the distribution chamber) from Bharat Nagar to Pitampura, which will ensure that the sewage generated from areas such as Karol Bagh, Shastri Nagar, Gulabi Bagh, Rampura, Ashok Vihar and Keshavpuram is prevented from entering the Yamuna.

Another major project completed is the rehabilitation of the trunk sewer in Jhilmil colony.

After the completion of the Kondli STP, the quality of water entering the Shahdara drain will improve to a great extent.

The rehabilitation work of a peripheral sewer in Rithala is expected to be completed by April.

This will have a direct impact on the sewage generated in the Ashok Vihar and Jehangirpuri areas, the statement added.

The STPs of the Rithala cluster are being upgraded and the work is progressing well. The permissions regarding the relocation and transplantation of trees on the STP premises have been received.

“The STP for Okhla is also progressing well. This will be the largest STP in India with a capacity of 565 MLD. A total of 13 projects for 1384.5 MLD have been taken up in Delhi for the cleaning of the Yamuna,” the statement said.