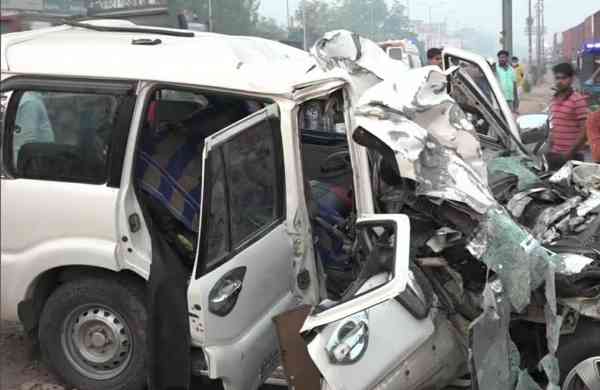 Express News Service
AGRA/LUCKNOW: Eight persons died on the spot and four others were left injured after the SUV they were travelling in collided with a truck coming from the opposite direction in Etmadput area of Agra district in the early hours of Thursday.

The toll went up to nine later as one of the injured persons succumbed during treatment.

According to local eyewitnesses, the driver of the SUV bearing the registration number of Jharkhand, reportedly dozed off and lost control of the wheel. The SUV jumped the road divider and collided  head-on with the truck coming from the opposite side.

The district police officials claimed that the one of the four people injured in the mishap succumbed to the wounds at the hospital.

The sources claimed that while the driver of the fateful vehicle hailed from Jharkhand, the passengers were from Phulwaria in Bihar.

After the accident, the truck driver and the cleaner fled the spot.

On reaching the spot, the police personnel took out those who were caught inside the mangled SUV by cutting it.

The SUV with the number plate JH13D5029 and registered in the name of Md Hizfur Rehman from Chhatra in Jharkhand was carrying 12 persons at the time of the mishap. They were coming from Gaya in Bihar.

The deceased, all of them natives if Jharkhand, have been identified as Guddu Kumar (17), Nagendra Kumar (15) Surendra Kumar (17), Vipin, Babloo Prajapati, Vikas Kumar, Rajesh (26) and Aman.

The injured have been identified as Sujit, Suraj Dev (35) and Chotu.