New variants of Covid-19 virus not behind the fresh surge in cases: Government 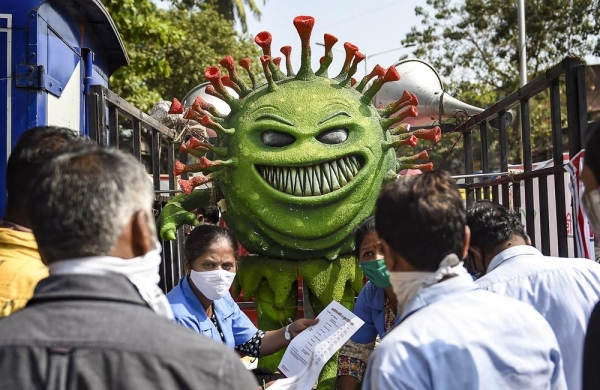 Express News Service
NEW DELHI: The government on Tuesday clarified that no new variants of the Covid-19 virus are responsible for the upsurge in active cases in some states, referring to the data from genome sequencing of virus samples so far.

At least five states in India have reported a gradual rise in active Covid cases over the past several days. The active coronavirus cases in the country crawled up to over 1.5 lakh after touching a low of 1.3 lakh cases earlier this month — the lowest since June.

VK Paul, Member, Health, Niti Aayog, who also heads the national Covid-19 task force, said in a press briefing that while two variants of SARS CoV 2 — N440K and E484K — have been detected in Maharashtra, Kerala and Telangana, there is no epidemiological evidence to suggest that these mutants are causing the faster spread of the disease.

“Based on information available to us, yes these variants are there but there’s no reason today for us to believe, on the basis of scientific information, that these are responsible for the upsurge of the outbreak that you see in some districts of Maharashtra and Kerala,” said Paul.

He also said that so far nearly 200 cases of the UK variant, six cases of the South African variant and one case of the Brazilian variant of SARS CoV 2 have been found in India in the 3,500-genome sequencing tests carried out since December.

ALSO READ | Over 7,000 coronavirus mutations in India, many have serious risks: Scientist

These three variants, whose presence have been detected in international travellers but not in the community so far, are of particular concern as they are found to be more transmissible and capable of causing severe disease in a higher number of infected people.

The data generated by the consortium, INSACOG, led by the National Centre for Disease Control is being epidemiologically analysed, interpreted and shared with the states or districts for investigation, contact tracing and planning response strategies.

The rise in active cases, after a long and swift decline over several weeks, meanwhile has spurred fresh worries for the Centre’s disease response plan.

Union health secretary Rajesh Bhushan highlighted in the briefing that nearly 62% of the healthcare workers, scheduled for the second dose of Covid-19 vaccination, have taken the jabs while 41 % of the targeted frontline workers have received the shots.