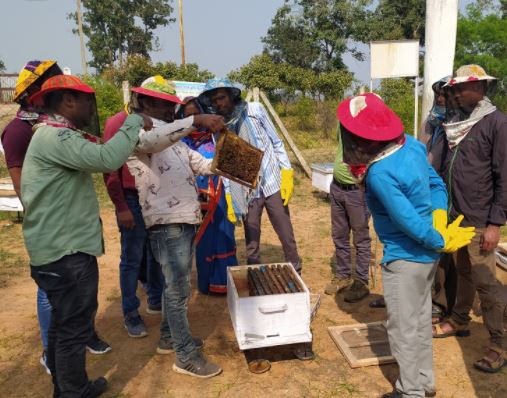 As part of the innovative initiative for the economic support of farmers in Korea district, a dozen tribal farmers have produced more than one lakh honey in the first quarter itself. In the coming quarter, the amount of profit generated by tribal farmers will double. Now preparations are to be made on a more comprehensive scale. The work of beekeeping and honey production is being done by a group of tribal farmers in the district of Korea, with the technical cooperation of the Center for Agricultural Sciences – Korea, run under Indira Gandhi Agricultural University. It may be noted that beekeeping has been done in the Salka region of Korea in the past years with advanced scientific method and training is being provided to the farmers of the district to provide economic support to Madhu Kranti. In Krishi Vigyan Kendra Korea, the farmers of the group had extracted 75 kg of honey from the Vanulasi in November-December.

Bee boxes can also be kept at the farmland, on the roadside, in the garden or in places where flowers are available. The bee can take its food (flowers and pollen) from a radius of about 3 kilometers. In Barabaspur and Lohari, this work was started by the district administration by providing financial support to the farmers for bee keeping tools, box, honey-removal-equipment etc. Shri Rajput said that interested farmers can get a grant from Khadi and Village Industries Commission and develop a new source of income by developing it as a cottage industry.