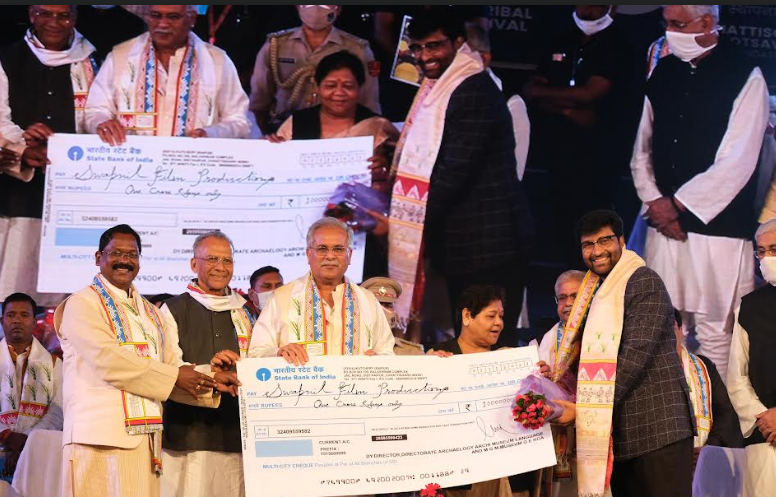 Cinema is considered a mirror of society. Whatever good and bad events happen in the society, its glimpse can be seen in films, while the glimpse of art, culture and tradition of a country and state is seen by connecting it with films and literature. The Chief Minister Shri Bhupesh Baghel has implemented the new Chhattisgarh Film Policy-2021 with the aim of preserving and promoting the ancient art, culture and tradition of Chhattisgarh and film production based on historical stories and personalities and works of legends. Under this new film policy, the state government will provide various incentives for production of feature films, web series, TV serials, reality shows, OTT as well as short films, facilitating filming and promoting private investment in the film sector. Provision has been made for different grants in categories. Apart from this, financial assistance is also mentioned in the film policy for opening of cinema halls, single screen and multi screen. This will definitely give a new life to the marginalized Chhattisgarhi film industry, while the implementation of the new film policy in Chhattisgarh will prove to be a milestone in the development of people associated with the Chhattisgarhi film industry here. With the implementation of the film policy, the film industry is proving to be a milestone in the development of producers, directors, artists, writers, technicians. At the same time, along with providing a high level platform to the people associated with Chhattisgarhi industry, they will get a golden opportunity to nurture their talent. The Chhattisgarh Culture Council has been constituted under the chairmanship of the Chief Minister to bring all the divisions of the Culture Department under one umbrella, giving a new dimension to the state’s traditional art-culture, dialect-bhakha, art literature. To promote culture and tradition and to accelerate the continuous development, Culture Minister has been made the Vice-Chairman of the Council. At the same time, heads of academies and research chairs have been made members of the Council of Culture. Certainly the efforts of these talents will get new flight. Cinema has become the biggest means of entertainment all over the world today. The cinema industry continues to flourish. Cinema, which started in India from the colonial period, is today competing with world cinema. There is a lot of potential for its development in the coming time. In such a situation, the new film policy of Chhattisgarh will be beneficial not only for the state but also for the people associated with the film industry in the country. If films of other regions including Bollywood, Marathi, Bhojpuri, South Indian will start being made in the state, then employment opportunities will be available here for the people associated with this genre. Youth in the state will be inspired to join films. Chhattisgarh film industry will flourish, industry will be updated with animation as well as new technology. With this, better employment options will also be available to the youth. As soon as Chhattisgarh’s new film policy was formed, Chhattisgarh’s producer-director and writer Manoj Verma, who received the National Film Award from the Ministry of Information and Broadcasting, received one crore rupees in the decoration ceremony organized on the occasion of 21st State Foundation Day. And being awarded the award of citation has also been possible due to the new film policy of Bhupesh Sarkar. This is only the beginning. Inspired by this, along with innovation by many filmmakers of the state, films started being made on Chhattisgarhi dialect, Bhakha, art, culture-tradition and stories, ideas related to historical and legends. With this, Chhattisgarh will get a new identity in the country and the world in the name of Chhattisgarhi films like South Indian, Marathi, Bengali and Bhojpuri etc. Along with this, the government has made a provision for giving big incentives to Chhattisgarhi films receiving national and international awards under the new film policy. The provision of giving an incentive of up to Rs 5 crore to the Chhattisgarhi film, director, actor-actress winning international awards like Oscar, will definitely prove to be a milestone in the direction of making quality films by the filmmakers. In the new film policy, there is a provision for separate grants for the production of first, second and third films. Hindi-English films as well as 50 to 75 percent of the entire shooting day in local language and local locations, in the event of shooting a film, a grant of Rs. Will attract and encourage film making. At the same time, due to the requirement of 20 percent supporting artist, technical and ground staff, employment opportunity will be available here for the people associated with this business. With such conditions, there is a provision of grant for 60 to 90 films in every financial year on the production of first, second and third films in Hindi, English and local and other languages. More and more films will be made here due to grants and incentives to films. This will also increase employment opportunities for the people of the state associated with this mode. Provision of additional grant for filmmakers who give opportunities to local artistes in national level films in the film policy will give place to the artists here in other national level films including Bollywood. It will be a matter of pride for the state. To give impetus to the film industry in the state government’s new film policy, Film Development Corporation, Film Empowerment Committee, Development of Film City, Film Facilitation Cell, Single Window Clearance, Promotion in purchase of film making equipment, Film Studio and Lab, Film Training Institute And by adding many dimensions like dispute resolution, Chhattisgarh is working towards strengthening the film industry. This will provide a new direction to the film industry of the state, while the state government will take the direction of giving national and international recognition to the dialect, language, art, food, dress, art and culture through films. Worthwhile step. Like this:Like Loading… Continue Reading