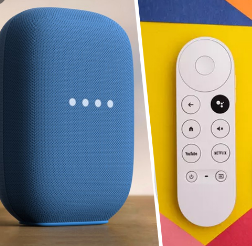 Google has launched its next generation Chromecast, which will come with Google TV. Many changes and improvements have been made in it. Now these devices will come with a remote. This is different from Amazon Fire TV and Roku, as it gives the TV an Android TV interface. The company also launched Nest Smart Speaker. of the Chromecast device that comes with Google TV is $ 49.99 (about Rs 3,700) in the US. Selling of this device has also started with the launching. The company said that it can be sold in other countries by the end of the year. This device comes with a touch and voice control remote. However, Google has not provided information about its availability and price in India. You will be able to buy it in Sky, Snow and Sunrise color options. Google has also launched its new Nest Smart Smart Speaker. Its price is $ 99.99 (about 7,400 rupees). It can be purchased in chalk, charcoal, sage, sand and sky color options. It has a 19mm tweeter, 3 far-field microphones, 2-stage mic mute switch and quad-core ARM Cortex-A53 processor. Bluetooth version 5.0 and Wi-Fi are provided for connectivity. Apart from this, this speaker has got the support of touch-control and built-in Chromecast. The company claims that this speaker is 75 percent louder than Google Home and produces 50 percent Stronger bass.