Never said about restoration of Article 370: Gupkar leader tones down on earlier promise 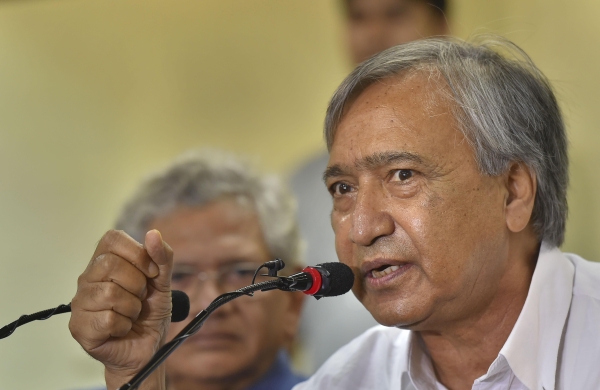 Express News Service
SRINAGAR: Three months after the formation of People’s Alliance for Gupkar Declaration (PAGD) to fight for restoration of J&K’s special status, the convener of the seven-party alliance, Mohammad Yousuf Tarigami, on Thursday stated that the alliance never said it would get back Article 370.

He also ruled out launching any big agitation. Talking to this newspaper, Tarigami said they are planning to meet national leaders.

“We will also be holding a convention. We will visit different parts of Jammu region and talk to people because this (revoking of J&K’s special status and bifurcation of erstwhile state) is not a concern of an individual or only of Kashmir’s population, but all of J&K.”

When asked whether the PAGD, which was formed in October last year to fight for Article 370 restoration, has any road map, he said, “Road map is not a fixed agenda.But we have got a fixed agenda and that is the restoration of constitutional position of the erstwhile J&K state.”

He, however, asserted that they never said they will get it (Article 370) back.

“Which Gupkar Alliance leader has said they will bring it back. We said we will struggle and raise our voices. What else can we do?”

On whether peaceful agitation will be part of their struggle for Article 370 restoration, Tarigami said, “I can’t say anything on it. We have not sat together to discuss this point. When we meet, we will discuss every option. We will do whatever is required peacefully within norms of the law.”

Taking a dig at PM Narendra Modi and Home Minister Amit Shah, he said, “They had promised in Parliament that statehood of J&K would be restored, why are they not restoring it. The BJP is also demanding it. Why don’t they restore the statehood.”