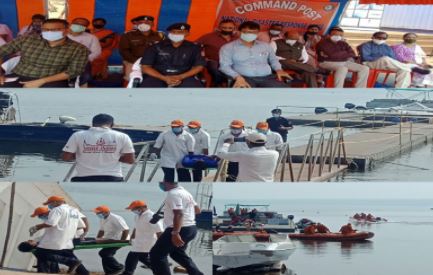 National Disaster Response Force (NDRF) on Tuesday demonstrated the equipment used for rescue, first aid and disaster relief under the Emergency Disaster Management at Ravi Shankar Sagar Reservoir in Gangrel on Tuesday, Collector Jayaprakash in Water Sports Zone This was done in the presence of officials of various departments including Maurya, SP BP Rajbhanu. The collector said after the demonstration that the NDRF is known for best implementation of disaster management in the country. Its jawans quickly and intelligently save the lives of others by taking their lives in the palm. Giving his best wishes to the team from Cuttack for their excellent performance, he asked for cooperation and coordination as much as possible from the district administration.

Earlier, Quick Response was conducted by a team of National Disaster Response Force (NDRF) personnel from Mundali Cuttack, Odisha at 12.30 pm today to save the drowning youth from water in the water sports zone. NDRF personnel first performed emergency survival in their three separate boats. He drilled the macro by Life Boy wearing a life jacket. Taking quick action to save the drowning jawan, went fast to him and put him in the boat, then by the other team who was standing on the shore, taking measures to temporarily take the victim to the first aid room set up and determine the measures. Made in time-limit. Apart from this, empty jackets, life jackets prepared from jerican and dried coconut were also exhibited during this period.