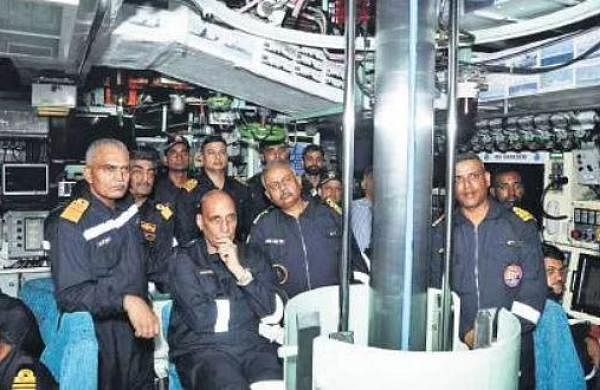 KARWAR: Defence Minister Rajnath Singh said here on Friday that India’s maritime power enhancement is being done not with an intention of any aggression, but is aimed at peace and security in the region. He was speaking after undertaking a sea sortie on one of India’s indigenously manufactured Kalvari-class conventional submarines INS Khanderi at the Karwar naval base in Karnataka.

Speaking to the media, the defence minister, who is on a twoday visit here, said he got “firsthand insight into the combat capabilities and offensive strength of the state-of-the-art Kalvari-class submarine”. “India is enhancing its naval power not with any intention of aggression, but to protect its maritime boundaries and ensure peace and prosperity in the region,” he added. Sharing his experience on the sortie, Singh said, “I got to know how the country’s naval power fares under water. It was a unique experience.”

“After this, my confidence in the Navy has further increased,” the defence minister added.Highlighting the country’s Make-in-India and Atmanirbhar Bharat initiatives, the minister said the Indian Navy will be inducting 41 warships and submarines in the coming days, of which 39 will be made under the Make-in-India initiative. “The INS Khanderi — the submarine in which I undertook the sea sortie — is developed in India. I have an emotional bond with it as I was present when it was commissioned in September 2019,” he added.

A statement from the Defence ministry said during the four-hour sortie, “the full spectrum of capabilities of underwater operations of the stealth submarine was demonstrated” to Singh, and he witnessed a “wide range of operational drills with the submarine demonstrating the advanced sensor suite, combat system and weapon capability which provides it a distinct advantage in the subsurface domain”. He also got a glimpse of the submarine’s capability to effectively counter anti-submarine operations by an adversary. He was accompanied by Chief of Naval Staff Admiral R Hari Kumar along with other senior Navy and ministry officials.

The operational sortie was accompanied by the deployment of ships of the Western Fleet, an anti-submarine mission sortie by a P-8I MPA and Sea King helicopter, a fly-past by MiG 29-K fighters and a search and rescue capability demonstration, the statement said. With this, Singh has now “witnessed first-hand the three-dimensional combat capability of the Indian Navy, after having embarked on the INS Vikramaditya in September 2019 and conducted a sortie on the P8I long-range maritime reconnaissance anti-submarine warfare aircraft earlier this month,” the statement added.

The INS Khanderi, part of the P-75 project, under which six conventional submarines are being made in India, was commissioned on September 28, 2019. The Navy has commissioned four of these Kalvari-(Scorpene) class submarines, and two more are likely to be inducted by end next year. Before setting out on the sea sortie, the minister participated in a yoga session at the naval base. He also interacted with the crew of INS Khanderi.