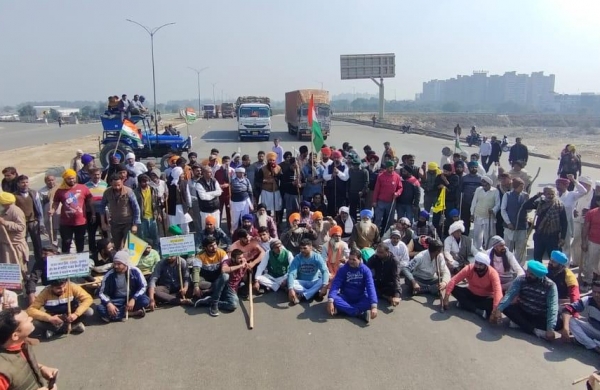 By Agencies
Farmers protesting against the Centre’s new agri laws and other issues blocked roads at several places in Punjab and Haryana on Saturday on the call given by the farmers’ unions for a nationwide ‘chakka jam’.

Farmers’ unions had on Monday announced a countrywide ‘chakka jam’ from 12 noon to 3 pm on February 6 when they would block national and state highways in protest against the Internet ban in areas near their agitation sites, harassment allegedly meted out to them by authorities, and other issues.

The police have stepped up security and made all arrangements for traffic diversion, said officials, adding adequate police personnel were deployed in Punjab and Haryana.

In the morning, farmers started assembling at their earmarked protest sites for ‘chakka jam’ in both the states.

“Elders and youth have gathered here to participate in chakka jam. It will be peaceful,” said a protester at the Punjab-Haryana border in Shambhu near Ambala.

“We want that the government should repeal these three laws as they are not in the interest of the farming community,” said another protester.

Protesting farmers said emergency vehicles including ambulances and school buses will be allowed during the ‘chakka jam’.