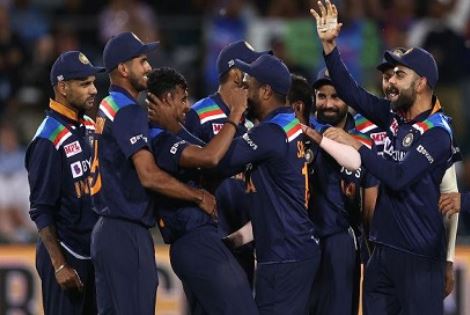 A spirited all-round performance from India saw them register a comprehensive 11-run win over Australia in the first T20I here at the Manuka Oval on Friday. The 1-0 lead in the three-match series is just how the visitors would have wanted to start after losing the ODI series 2-1.

If KL Rahul (51) and Ravindra Jadeja (unbeaten 44 off 23 balls) guided India to a respectable 161/7 in their 20 overs, Yuzvendra Chahal — brought in as concussion substitute for Jadeja — took the stage by storm with ball in hand and finished with match-winning figures of 3/25. Not to forget the brilliant show from debutant T Natarajan as he picked three wickets for 30 runs from his four.

Chahal took the field in the second innings after all-rounder Jadeja was hit on the helmet in the last over of the India innings and the BCCI medical team decided to assess the player before allowing him to get on with proceedings. Chahal was brilliantly supported by Natarajan as the former changed the momentum of the game despite not being named in the initial playing XI.

Chasing a decent target of 162, Aaron Finch and D’Arcy Short provided a flying start. The duo added 53 runs in the powerplay and smashed Indian bowlers across the park.

Chahal, in his first over, removed skipper Finch (35) in the eighth over. Steve Smith joined Short in the middle and accumulated 16 runs for the second wicket. The team then suffered a blow as they lost two quick wickets in successive overs. Chahal struck again and bagged in-form batsman Smith (12) while Natarajan caught explosive batter Glenn Maxwell (2) in front of the wickets.

Short and all-rounder Moises Henriques then stitched a partnership in pursuit of the target. The duo dragged the side from 75/3 to 113/4 before Short was picked by the Tamil Nadu speedster in the 15th over. Short played a slow knock of 34 runs off 38 balls and held one end up.