Nails on roads for farmers will turn out to be nails in ‘political coffin’ of BJP: Jayant Chaudhary 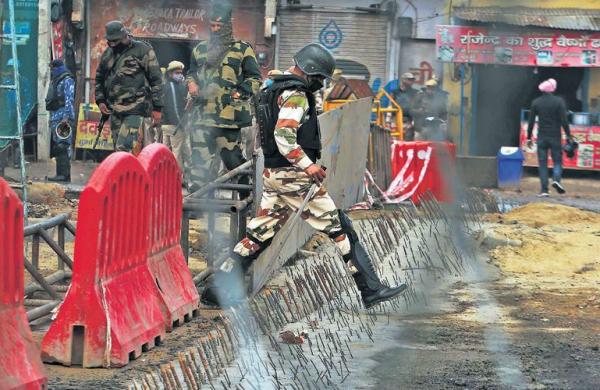 By PTI
NEW DELHI: Asserting that farmers will not settle for anything less than the repeal of the new farm laws, RLD vice president Jayant Chaudhary on Friday said the government’s “strong arm tactics” will not work against the tillers and the nails being laid on roads for them would turn out to be the nails in the “political coffin” of the BJP.

Chaudhary, who has participated in a number of ‘kisaan panchayats’ in western Uttar Pradesh and is campaigning aggressively against the Centre’s farm laws, said the government must immediately withdraw the legislations and draft them afresh after taking the consent of farmers.

In an interview with PTI, the Rashtriya Lok Dal (RLD) vice president alleged that the current leadership of the country is far removed from sentiments and is not perturbed by riots, deaths or big agitations as it is “cocooned” in its own bubble.

“It is a totalitarian administration. They are not even listening to their own political people on the ground. If you speak to BJP MLAs or MPs off the record, they are not happy and they can feel the angst rising in the people of India, in the common man who voted for (Prime Minister Narendra) Modi,” the former MP said.

Chaudhary said he has been to almost every ‘dharna’ site of the farmers, has sat among them, spoken to them at different levels, addressed ‘kisaan panchayats’, and feels that the farmers have formed an emotional connect cutting across different states like Punjab, Haryana and Uttar Pradesh.

“There is unity building, and I don’t think that these farmers are going to take anything less than what they have come this far for (which is repeal of the laws),” he said.

The farmers have left their villages, walked for miles, have faced so many hardships with “about 150 of them even losing their lives” and they are still not willing to back down even in the face of the government hardening its stance, the RLD leader said.

The farmers’ stance is very clear and they are saying that these laws are not made for them and they will not accept them, he said.

It is always the prerogative of the government of the day to make laws but ultimately it is the people’s will that must prevail, Chaudhary asserted.

Asked about the multi-layered barricading and iron nails studded on roads at protest sites on Delhi’s borders, he said, “These are not nails being put on the roads going to Delhi, these are nails being put into the political coffin that is being made for the BJP.”

“This is a very hurtful image that has gone out. These are the people who freed Delhi from the British, who fought against the Mughals, whenever there was a crisis in Delhi, it was the farmers close to Delhi in Punjab, Haryana, Uttar Pradesh that were first there.

Today, the Kisan Ghat (memorial of former prime minister Chaudhary Charan Singh), Parliament and Rajghat are in Delhi, and you are forbidding these farmers from even entering Delhi,” he said.

On the government’s offer to suspend the farm laws for 18 months, he said the offer has not found favour with either the protesting farmer organisations or with the farmers themselves.

The questions the farmers are asking is why 18 months suspension and why the Supreme Court is being involved in the work of Parliament or the government, he said.

After 18 months again the same problems will arise and the government will say “we have given an undertaking in the Supreme Court, so therefore, we cannot do anything about it”, Chaudhary said.

“So in a way it will create disharmony between the judiciary and the role of the executive in Parliament,” he said.

“My suggestion is that they (government) should completely do away with these laws and communicate more effectively, reach out to the farmers, if they feel there is a reform that is needed, take their consent and then draft anew,” he said.

People are not liking the government’s approach in dealing with the agitation, Chaudhary asserted.

Asked about his father and RLD chief Ajit Singh announcing support to the Bharatiya Kisan Union (BKU) in their protest, Chaudhary said it is not just an alliance with the Tikaits (Naresh and Rakesh), but is an expression of solidarity with farmers.

“We are facing the regime of Yogi Adityanath (in UP) where any sort of dissent is crushed by immoral use of power.

That is why Chaudhary Ajit Singh reached out to the Tikaits and said ‘we are with you, don’t back down.

That had a huge impact and that has led a lot of people to come out in support,” he said.