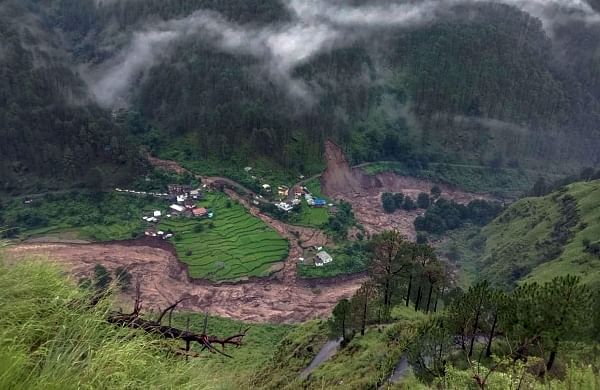 By ANI
SHIMLA: Amid rain in Himachal Pradesh during the ongoing monsoon season, Nahan-Kumarhatti road was blocked on National Highway 907 following a massive landslide on Monday.

The SDMA had on Monday informed that the estimated loss worth Rs 632 crores has occurred in the state due to rain, cloudburst and landslides.

While speaking to ANI, SDMA Director Sudesh Kumar Mokhta had said, “So far, 211 people and 438 animals have died in incidents related to rain, cloudburst, and landslide in Himachal Pradesh during this monsoon season.”

On Sunday, the Chandigarh-Manali Highway (NH-3) was blocked due to a landslide near the Pandoh area of Mandi district. According to the district police official, the restoration work is still underway.

Also, as reported on July 28, 14 people died due to floods accompanied by landslides in Lahaul and Kullu. “14 people have died in 24 hours due to heavy rains and floods, of which 10 died in Lahaul and 4 people in Kullu. 3 bodies are yet to be recovered from Lahaul. The water flow is very high in Kullu, so we are unable to recover any bodies,” Anil Khachi, Chief Secretary of Himachal Pradesh government had informed.

Chief Minister Jai Ram Thakur had said that the National Disaster Management team was also been moved towards the Lahaul-Spiti district.