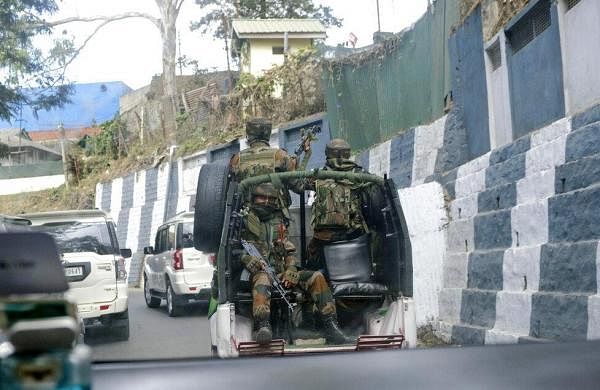 KOHIMA:  Konyak Union (KU), the apex tribal body in Nagaland’s Mon, imposed a day-long bandh in the district on Tuesday to protest the killing of 14 civilians by security forces, and announced seven-day mourning from the next day.

The KU urged security forces to abstain from patrolling in the Konyak region during the seven-day mourning period, and warned that if the law enforcers do not abide by it, they will be responsible for “any untoward incident that might occur”.

The union, in a letter sent on Monday, requested President Ramnath Kovind to constitute a Special Investigation Team (SIT), also comprising two members of Eastern Nagaland People’s Organisation (ENPO) in it, and identify the Army personnel involved in the incident, and put in the public domain within 30 days the action taken against them.

It demanded that 27 Assam Rifles immediately vacate Mon for failing to protect civilians, and Armed Forces (Special Powers) Act be removed from the entire Northeast.

“We have imposed a day-long bandh in Mon district on Tuesday. It is going on peacefully. We have also announced seven-day mourning from Wednesday,” Konyak Union president Howing Konyak told PTI.

The last rites of the 14 civilians killed in firing by security forces on December 4 and 5 were held in the Mon district headquarters on Monday.

When asked about Union Home Minister Amit Shah’s statement in Parliament, Konyak said, “At the moment, we are not in a condition to accept or reject his statement. We are saddened by the brutal killing of our people. What actually happened will only be known after the two survivors who are being treated in Assam regain consciousness.”

The union said that the incident seemed to be a result of “complete failure of military intelligence” and “cannot be termed as a case of mistaken identity at all”.

“The slain people were villagers with no connection to any element that may cause the slightest concern to security forces or national security in any respect,” the KU stated.

“This is an act of atrocity beyond reasoning. No explanation can justify this heinous act of deliberate crime against humanity,” it added.

The union said that the perpetrators up to the highest rank be booked and tried at a civil court.

Meanwhile, Nagaland Chief Minister Neiphiu Rio on Monday demanded the repeal of Armed Forces (Special Powers) Act, 1958 from the state, where 14 civilians were killed by security forces in Mon district in an anti-insurgency operation fiasco and said the state too has special powers.

Discussions and deliberations need to be held on the purpose of imposing AFSPA and how to revoke it, Rio said during the public funeral of the 14 daily wage earners of a coal mine, who were shot dead by security forces on Saturday at Oting village on their way home from work.

Article 371(A) of the Constitution grants special provisions to Nagaland.

It states that no Act of Parliament shall apply to Nagaland unless its legislative assembly decides so by a resolution.

After the funeral, the chief minister tweeted Nagaland and the Naga people have always opposed #AFSPA. It should be repealed.”

Paying his last respects to the innocent miners who were killed at Oting, Rio said at the funeral service,”Their sacrifices will not be forgotten. We are together in this. We stand in solidarity with the people”.

He asserted that since the security forces directly fired upon the civilians without even stopping them for identification, severe action will be initiated against those involved.

“They (the miners) have not sacrificed their lives for India but for the Nagas,” he said and announced ex gratia of Rs five lakh to the next of kin of each of those killed in the incident and Rs one lakh to the injured.

Rio also said that Union Home Minister Amit Shah has announced an ex gratia of Rs 11 lakh and government job to the families of each victim.

The funeral service of the miners was held at the Mon headquarters helipad ground and was attended by various tribal organizations under the aegis of the Eastern Nagaland People’s Organisaiton and Konyak Union, the apex tribal body of the district.

Conveying his solidarity with the victims and the people of eastern Nagaland over the killing, Rio said that he has informed Shah that the situation in the state is “fine” but it was the Army which has committed a “blunder” by killing the innocent civilians”.

He said “AFSPA give powers to the Army to arrest civilians without any warrant, raid houses and also kill people, but there is no action against the security forces . They (the Army) have created a law and order situation”.

Rio told the mourners that Shah, Defence Minister Rajnath Singh and the Commander of 3 Corps, Lt Gen J P Mathew have assured him of a thorough probe and punishment of those responsible as per the law.

The chief minister said candlelight processions were held across the state in solidarity with the people of the eastern Nagaland and th government suspended the ongoing annual Hornbill Festival at Kisama.

Solidarity messages and condolences were read out at the funeral by various organizations and civil societies and many of those who were present carried banners and placards demanding justice for the “brutal murder “.

After the funeral service the bodies of the 14 civilians were taken to their respective villages for burial.

A common memorial stone will be erected at Mon district headquarters in their honour, officials said.

Meghalaya Chief Minister Conrad K Sangma on Monday said the Armed Forces (Special Power) Act, 1958 has been counterproductive to address law and order issues in the North East region and should be repealed as he joined the growing chorus for its withdrawal, following the killing of civilians in Nagaland.

Civil society groups, rights activists and political leaders of the region have been demanding the withdrawal of the “draconian” law for years, alleging excesses by security forces with impunity under the cover of the Act.

The AFSPA confers special powers on the armed forces in areas deemed as disturbed.

“The AFSPA has always been counterproductive and there have been more unrest and people have to go through a lot of pain,” Sangma, who is also the national president of the NPP, said in a statement.

He also said his National People’s Party, an ally of the BJP, is against the AFSPA and will continue to urge the Centre to repeal the “draconian” Act.

Sangma, however, acknowledged that the region has law and order problems and said there are other ways to address the issues.

Earlier in the day, he tweeted, “AFSPA should be repealed.”

The state Congress also supported the chief minister, urging him to convene a meeting for consultation over the issue.

“We must go all out to demand immediate repeal of this draconian oppression on our people. Kindly convene a consultation at the earliest,” Congress MLA Ampareen Lyngdoh tweeted in reply to Sangma.

The Hynniewtrep Youth Council (HYC) also demanded that the AFSPA be withdrawn for building a peaceful North East.

“We call upon the Government of India to rein in its armed forces if they really wish peace to prevail in the region as incidents like the killing of civilians will only bring instability, which is not a good sign for the NE as a whole,” HYC general secretary Roykupar Synrem said.

“Steps should be taken towards building a peaceful North-East and the correct and necessary steps towards achieving full peace is to withdraw or repeal the AFSPA from the region completely as well as deployment or stationing armed forces to the bare minimum,” he said.

Voicing concern, the Khasi Students Union (KSU) said the government should formulate laws to safeguard the rights of the indigenous people.

“The Government of India should immediately revoke the monstrous AFSPA and instead formulate laws to safeguard and protect the rights and existence of the indigenous inhabitants of NE India,” it said in a statement.

KSU president Lambok Marngar said the government should take stringent and harsh action against the “erring and bloodthirsty” personnel involved in the civilian killings in Nagaland.

At least 14 civilians and a soldier were killed in a botched anti-insurgency operation and retaliatory violence over the weekend in Mon district of Nagaland, as per police.

Opposition political parties in Assam Monday lent their voices to the demand for repeal of Armed Forces (Special Power) Act (AFSPA), 1958, which has gained renewed momentum following the death of 14 civilians in firing by security forces in a botched anti-insurgency operation in Nagaland.

Raijor Dal president Akhil Gogoi condemned the firing in Mon district of Nagaland and demanded immediate arrest and punishment of all involved in it.

He also demanded that the National Investigation Agency be entrusted with enquiry into it and the incident be declared as a terrorist act.

In a video statement shared through social media, the lawmaker said, “We have been seeing the army committing such excess on innocent civilians in the north east region in the name of counter insurgency operations”.

The armed forces work under the cover of the AFSPA in the region and do not have to face any court of law.

It conducts its own internal enquiry and the people do not get to know whether a case reached its logical conclusion of not, Gogoi added.

“(The) Nagaland killings are a caricature of the Indian Govt. Revoke AFSPA,” Gogoi also wrote on Twitter.

Condemning the Mon firing incidents, he wrote, “Its heartbreaking to see civilians being gunned down by the same forces that were meant to protect them. I demand that laws like #AFSPA be repealed from the #NorthEast. #Nagaland” The party’s general secretary, Jagadish Bhuyan, blaming AFSPA for the incident tweeted, “It is past time for us to wake up and protest against this atrocity, or many more civilians will be killed in this manner!” “The GOI should SCRAP THE AFSPA and allow the NE people to live as dignified citizens of the country without any discrimination!” he added.

“Real justice to the victims would be ending this type of killings with impunity. There should be collective voice from all sections against the draconian AFSPA which allows such impunity,” the legislator tweeted on Sunday.

In a tweet on Sunday he condemned the incident and wrote, “This is state terrorism. Scrap AFSPA.”

The CPI staged a demonstration in front of its party office here on Sunday demanding revocation of the Act and justice for the victims and their families.

At least 14 civilians and one soldier were killed in firing by security forces in a botched anti-insurgency operation and retaliatory violence within 24 hours in Mon district of Nagaland since Saturday evening.

AFSPA is in force in Assam, Nagaland, Manipur (excluding Imphal Municipal Council Area), Changlang, Longding and Tirap districts of Arunachal Pradesh and in areas falling within the jurisdiction of eight police stations of districts in Arunachal Pradesh bordering Assam.

Civil society groups, rights activists and political leaders of the region have been demanding the withdrawal of the “draconian” law for years, alleging excesses by security forces under the cover of the Act.