Nagaland firing: Eerie calm in Oting a week after killing by security forces 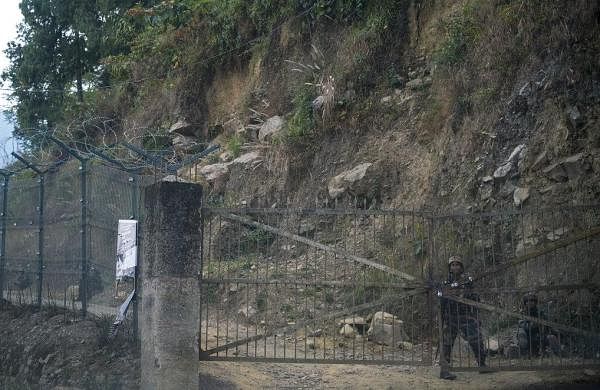 OTING: There is an eerie calm in Oting village in Nagaland’s Mon district, where despite the approaching Christmas there are no buntings or traditional decorations.

Visitors to this remote hilly place are instead greeted with the sight of a lone white banner flapping in the air in memory of the 13 hapless young mine workers who fell victim to bullets sprayed at them by security forces a week ago in a botched counter insurgency operation.

The calm speaks of the shock, sorrow and tension after the brutal killing and villagers, yet to come to grips with the tragedy, have put restrictions on accessing the site or visitors speaking to the bereaved families since the past two days.

What strikes a visitor in this hour of grief is the famed Naga hospitality.

A community kitchen has been opened since the incident and all visitors – ranging from government officers, the police, tribesmen and journalists are offered a meal of steamed rice, yellow dal, meat and pickle besides drinking water and black tea.

“It is a massive tragedy. We appreciate the concern shown by everyone. We hope we get justice for the bereaved families,” an elderly inhabitant of the village told PTI on Friday.

He is, however, firm on visitors not being allowed to meet the victims’ families.

“The people coming from outside insist on meeting them. They make the families recount the horror over and over again. We decided to put a stop to it as there is no point in making them relive the painful loss,” he said.

Another villager, who identified himself at Kheatwang Konyak, tries to explain that the villagers are not against people coming to Oting at this time.

“We are coordinating with the visitors and providing whatever information or help they need. Earlier, visitors moved around alone, now we are only streamlining it”.

He adds, “We lost innocent lives in the incident. Families have been shattered. God knows when we can move on from such a tragedy.”

Near the hall where food is being served to visitors, villagers sit huddled in a meeting, to which outsiders are disallowed.

When asked, Apo and Alem, who are among the girls of the village who have volunteered to work at the kitchen, said “We have been busy helping. The impact of our loss as a community is yet to sink in”.

Later, Kheatwang, who accompanied this correspondent to the incident site, which is about 10 km from the village, said that the central government’s claim that the youths were gunned down as their pickup van did not stop at check points and that they tried to flee is not acceptable to the villagers.

He points to the road, which is practically a mud track connecting the village to the incident site and is barely wide enough to allow the passage of a single vehicle.

“You can see for yourself. It is not possible for any vehicle to go beyond 10-20 km per hour on this road.”

He vehemently disagrees that the pickup van had not stopped at check points because “There are no check points at all, baring the one at the entrance of Oting village. Besides, the van was coming from the opposition direction.”

Pointing to the lone army vehicle, which escaped being torched by angry villagers on that fateful Saturday evening, Kheatwang said, “The bodies of the six victims who were gunned down were taken from the pickup van and loaded like luggage pieces at the back of this van.”

The pickup still lies at the incident site along with three other burnt Army vehicles, including the one used to carry the hapless victims – mute testimonies to one of the worst incidents of killing of civilians by the security forces.

The area is naturally cordoned off and a platoon of Nagaland police stands in guard.

Local villagers give company to the policemen to ensure that there is no attempt to tamper with any evidence by any person.

Besides the six villagers in the pickup van who were killed in the firing on December 4, another seven were killed by the Army in violence involving irate locals at the incident site later that day.

One Army personnel was also killed in the melee.

Another civilian was killed when a mob attacked an Assam Rifles camp at Mon town on Sunday.