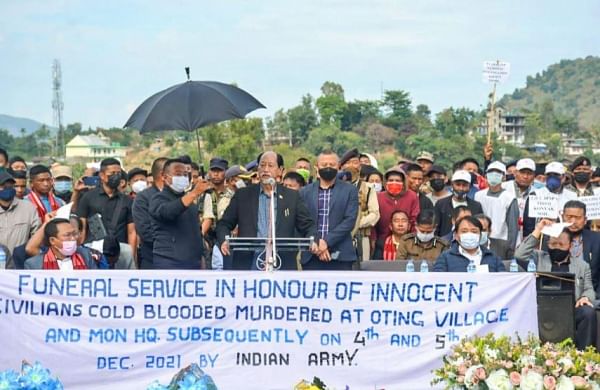 KOHIMA: A six-hour ‘bandh’ (shutdown) imposed on Monday by Naga Students’ Federation (NSF) to protest the killing of 14 civilians by security forces passed off peacefully, despite minor skirmishes between students and security forces.

Philo said the shutdown was to protest the shooting down of civilians and in solidarity with the family of victims.

The ‘bandh’ was imposed in the respective jurisdiction by the federating units of NSF, he said, adding that there was no report of any untoward incident as the Nagas in general stood in solidarity from 6.00 am to 12 Noon.

“The sole purpose of this bandh was to display our grief, our anger and our sentiments…..Naga people are free people and we have every right to defend what we have,” they said.

Meanwhile, the Federation appealed to the state government to cancel the remaining few days of the Hornbill festival as a mark of respect to the dead.

Maintaining that it is aware of the monetary packages being announced as ex-gratia by both the state and central governments for the victims, the NSF however said the government must know that the Nagas people cannot be bought with money.

“Justice has to be done at all cost,” the NSF office bearers said, adding that “repealing of the contentious Armed Forces Special Powers’ Act will be the best way to honour their (dead civilians) sacrifices.

NSF also asked he government to hold a special session of the State Assembly to discuss the matter and recommend revocation of AFSPA.

During the six-hour bandh, the NSF also put up banners and placards some of which read “We stand in solidarity with our Naga brethrens — The innocent civilians who were brutally killed at Oting village, Mon district”, “Nagas have every right to live in peace”.

Beside the six-hour shutdown call of NSF, other civil societies and tribal bodies also imposed bandh in the respective areas with Dimapur Chamber of Commerce and Industries enforcing total bandh in Dimapur for 12 hours and Lotha Hoho imposing band in Wokha district.