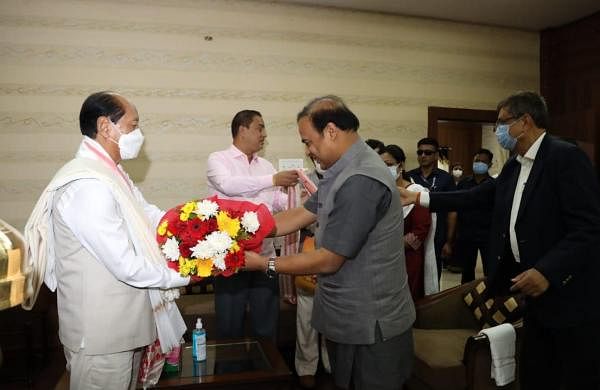 None of them disclosed what exactly was discussed. Calls made to Rio went unattended. Sarma said issues of mutual interest were discussed.

“Glad to have met HCM Nagaland Sri @Neiphiu_Rio at Jorhat today, along with MP Sri @KamakhyaTasa. Discussed several issues of mutual interest in order to strengthen the age-old ties & bonhomie b/w two states. We strive towards building an ever united & stronger #NorthEast,” the Assam CM tweeted.

Glad to inaugurate the state-of-the-art auditorium built under CSR of @OilIndiaLimited with Rs 4.65 cr at Jorhat Engineering College (JEC).I thank JEC for dedicating the auditorium to ex-student Arnab Kishore Bordoloi,who lost his life in the Baghjan fire incident last year. pic.twitter.com/4hCmFNRWZN
— Himanta Biswa Sarma (@himantabiswa) November 21, 2021
The two states are locked in a bitter and raging border dispute that claimed many lives in the past. In July this year, they had signed an agreement to de-escalate tension on the interstate border.

Sources said the duo must have also discussed issues pertaining to the Naga rebel groups as well as the United Liberation Front of Assam (ULFA).

The Centre has taken both of them into confidence as it tries to resolve the protracted “Naga political problem”. The peace talks with major rebel group National Socialist Council of Nagalim or NSCN-IM have hit roadblocks as the outfit has remained adamant on the contentious demand of Naga flag and “yezabo” (constitution).

As regards the ULFA, the Assam government is trying to reach the outfit back-channel as it attempts to initiate a peace process. The ULFA uses the soil of Nagaland as well as Arunachal Pradesh for movement to and fro Myanmar where it operates from. It works in coordination with several insurgent groups of the Northeast, including some NSCN factions.

The ULFA went into a peace mode after announcing a three-month long unilateral ceasefire which has been extended twice.