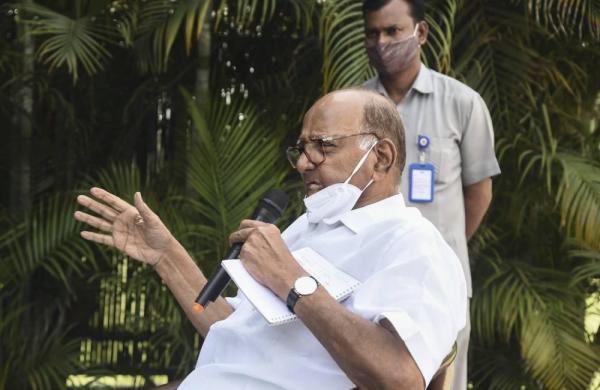 The meetings took place hours after Pawar told reporters that Maharashtra Chief Minister Uddhav Thackeray will decide the fate of Deshmukh, an NCP leader, amid speculation in state political circles that Maharashtra may soon have a new home minister.

Deshmukh had denied these allegations as baseless.

However, what transpired during the meetings at Pawar’s residence in Delhi could not be known.

Earlier in the day, Raut told reporters in Mumbai that allegations of Singh against Deshmukh and the Sachin Waze episode have dented the image of the Maha Vikas Aghadi (MVA) government in the state.

Waze was arrested by the NIA, which is probing the recovery of an explosives-laden vehicle from outside the south Mumbai residence of industrialist Mukesh Ambani last month and also the alleged murder of businessman Mansukh Hiran, the purported owner of that SUV.

Raut said all allies- the Shiv Sena, NCP and Congress- need to introspect if their “feet are on the ground”.

“Anil Deshmukh’s side also needs to be heard before taking any decision on him. We will take a decision on Deshmukh by tomorrow,” Pawar told reporters.

Jayant Patil, who is also the state Water Resources Minister, had said that the Delhi visit was planned three days ago.

“The Pandharpur Assembly bypoll is scheduled next month. Ajit Pawar and I decided to meet party workers in Solapur district to know their views over the selection of candidate and the party strategy, and then meet Pawar saheb in Delhi with the feedback before returning to Mumbai,” he said.

“Accordingly, both of us are in Pandharpur to discuss issues related to the bypoll with party workers,” he said. The Pandharpur bypoll is scheduled to be held on April 17. It was necessitated due to the death of NCP MLA Bharat Bhalke last year.

Meanwhile, Congress sources said Central leaders of the party are in touch with leaders in Maharashtra on the developments regarding Deshmukh.

A Congress leader told PTI on Sunday night that the CM was in touch with all prominent leaders of the Maha Vikas Aghadi (MVA) alliance in view of Singh’s letter.

“I don’t think Anil Deshmukh will be asked to resign, as it will amount to accepting the allegations made against him,” he said.

ALSO READ | Won’t be fair to comment as NCP chief has spoken: Congress on graft charges against Deshmukh

“I am not available. Nobody (in state government) has contacted me. And in any case even if they contact me, I am unavailable,” Ribeiro told PTI when asked about Pawar’s suggestion.

“I am 92 years old. Nobody goes around doing this work at the age of 92. If the inquiry is against the home minister of Maharashtra, then Mr Pawar should make it because he is the head of the (ruling) party,” Ribeiro said.

Ribeiro is a former Mumbai police commissioner, who eventually became the chief of Gujarat and Punjab police and was later named India’s ambassador to Romania.

“Why should a retired police officer be asked to do this,” he said.

Earlier in the day, Pawar told reporters in Delhi that he would suggest Chief Minister Uddhav Thackeray to seek Ribeiros help to investigate the claims made by Singh.

Pawar’s comments came during a media briefing at Delhi amid speculation in state political circles that Maharashtra may soon have a new home minister.

The allegations leveled by Singh against Dehsmukh are serious and require an in-depth probe, Pawar said.

Singh has claimed that Deshmukh wanted police officers to collect Rs 100 crore monthly for him from bars and hotels.

Pawar indicated that Chief Minister Uddhav Thackeray will take a decision in this matter soon and also action against Deshmukh.

“We will take a decision on Deshmukh by tomorrow,” Pawar said.

Deshmukh’s side also needs to be heard before taking any decision, he added.

Pawar said neither Thackeray nor Deshmukh were responsible for reinstatement of police officer Sachin Waze in the police force last year.

The NCP chief said he has spoken to Thackeray regarding Singh’s letter.

“I would suggest Thackeray to seek former IPS officer Julio Ribeiro’s help for looking into the claims made by Param Bir Singh,” he said.

Ribeiro rejected the idea, saying he is unavailable for this kind of work.

“I am 92 years old. Nobody goes around doing this work at the age of 92. If the inquiry is against the home minister of Maharashtra, then Mr Pawar should make it because he is the head of the (ruling) party,” Ribeiro told PTI.

Pawar said Singh had complained to him aboutpolitical interference in police department.

He said Singh had spoken of reports about his transfer, saying it would be an injustice to him.

Pawar said Singh made the allegations after his transfer on March 17 to the Home Guards.

There is no impact on the MVA government because of Singh’s allegations, Pawar said.

Efforts are on to destabilise the Shiv Sena-NCP-Congress government in Maharashtra but they will prove futile, he added.

In the eight-page letter to Chief Minister Uddhav Thackeray, Singh alleged that Deshmukh used to call police officers to his official residence and give them a “collection target” from bars, restaurants and other establishments.

Shiv Sena MP Sanjay Raut admitted that the allegations made by Singh against Deshmukh and about the Waze case have tainted the image of the Maha Vikas Aghadi (MVA) government in the state.

Raut saio all the MVA allies need to introspect if their feet are on the ground.

Former chief minister and BJP leader Devendra Fadnavis said Pawar was trying to save the Maha Vikas Aghadi government amid allegations of corruption leveled by Singh against Deshmukh.

“How were important postings and cases given to Waze without the knowledge of the chief minister and the home minister?” Fadnavis told reporters in Nagpur.

Waze is in the custody of the National Investigation Agency (NIA) for his alleged role in placing an explosives- laden SUV outside the south Mumbai residence of industrialist Mukesh Ambani last month.

The NIA is also probing the alleged murder of Thane- based businessman Mansukh Hiran who was in possession of that SUV.

“As the architect of the MVA government, Pawar is trying to save it, Fadnavis said and reiterated his demand for resignation of Deshmukh and a court-monitored probe into the allegations made by Singh.”

“Waze (a former encounter specialist who was suspended after the alleged custodial death of bomb blast suspect Khwaja Yunis in 2003) was reinstated by a committee headed by Param Bir Singh. But how is it possible that he got important cases and postings without the knowledge of the CM and the home minister?” Fadnavis said.

A demonstration was organised by BJP Yuva Morcha wokers outside Deshmukh’s residence in Nagpur.