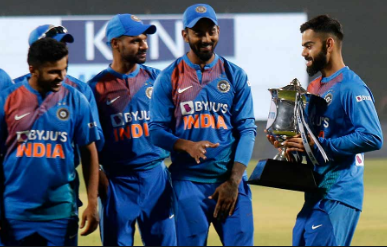 In the 27th match of the 13th season of IPL, Mumbai Indians (MI) defeated Delhi Capitals (DC) by 5 wickets. Mumbai topped the points tally with their fourth consecutive win. Mumbai’s Quinton Dickock placed his 12th in IPL and Suryakumar Yadav 9th. Dickock was voted man of the match.Batting first after winning the toss in the match, Delhi Capitals gave a target of 163 runs. In response, Mumbai lost 166 wickets in 19.4 overs and won the match by scoring 166 runs. For Mumbai, chasing the target, opener Dickock scored 36 and Suryakumar scored 53-53 off 32 balls. Apart from these, Ishaan Kishan scored 28 runs from 15 balls. 53 runs partnership for the third wicket between Suryakumar and Ishaan. Kagiso Rabada took the most 2 wickets for Delhi. Marcus Stoinis, Akshar Patel and Ravichandran Ashwin got 1–1 wickets. Mumbai Rohit Sharma had 150th match for Mumbai. He has become the second player from Mumbai to do this feat. Pollard has played 155 matches. Rohit has scored 5 runs off 12 balls in the match. He played 195 matches in IPL so far, scoring 5114 runs. During this, he also scored a century and 38 half-centuries.