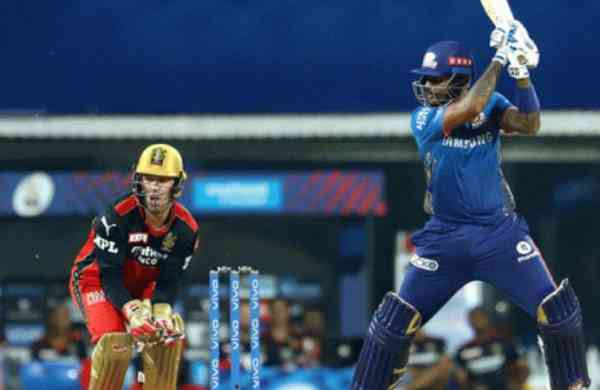 By ANI
CHENNAI: Mumbai Indians’ in-form batsman Suryakumar Yadav has revealed the story behind his trademark flick shot that he plays so effortlessly against the best bowlers of the world.

Suryakumar, who played the knock of 56 off 36 balls against Kolkata Knight Riders, smashed pacer Pat Cummins to almost out of the park as he struck a 99-metre six playing his trademark flick shot at the MA Chidambaram Stadium on Tuesday.

The right-handed batsman shuffled to the off-side and sent the ball flying on the leg side.

When pacer Trent Boult asked how he started playing that shot, Suryakumar said in a video posted by the IPL’s official website, “During my younger days, I used to play a lot of rubber-ball cricket on cemented track and on one side boundary used to be about 90-95 metres so think that shot has come from there. I’m really enjoying the way how I’m going right now and hopefully, continue the same for the team.

“I try to keep things really simple. I don’t complicate things. I know what I have been doing in that position in the last two-three years. I just go out there and express myself,” he added.

Mumbai Indians defeated KKR by 10 runs thanks to an all-rounder bowling performance from the Rohit Sharma-led side. Andre Russell’s five-wicket haul saw Mumbai Indians get bundled out for 152 after batsman Suryakumar’s (56) quickfire knock. In response, KKR was restricted to 142/7.

KKR was right on the track for an easy win but Rahul Chahar spun a web and removed the top four batsmen before Jasprit Bumrah and Boult’s fiery spell handed Mumbai Indians the match.

“Just trying to be clear with the plans we talked about in the meetings. It is probably a little bit intimidating coming up against Karthik and Russell, these players can clear the rope pretty easily. It was nice to cross the line,” Boult said on defending 15 runs in the last over.

Mumbai Indians will next take on SunRisers Hyderabad here at the MA Chidambaram Stadium on Saturday.