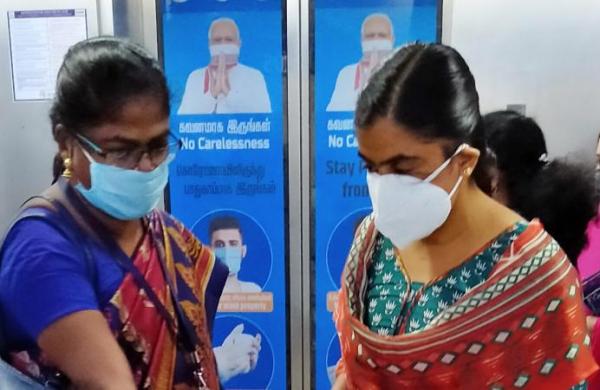 By ANI
BENGALURU: Multilayer masks are most effective at preventing aerosol generation, says a new study conducted by a team led by researchers at Bengaluru-based Indian Institute of Science (IISc).

The study was carried out in collaboration with scientists in UC San Diego and University of Toronto Engineering.

According to IISc, when a person coughs, large droplets (>200 microns) hit the inner surface of a mask at a high speed, penetrate the mask fabric and break up or “atomise” into smaller droplets, which have a greater chance of aerosolisation and thereby carrying viruses like SARS-CoV-2 with them.

Using a high-speed camera, the team closely tracked individual cough-like droplets impinging on single, double and multi-layered masks, and noted the size distribution of the “daughter” droplets generated after penetration through the mask fabric, an IISc statement said on Saturday.

For single and double-layered masks, most of these atomised daughter droplets were found to be smaller than 100 microns, with the potential to become aerosols, which can remain suspended in the air for a long time and potentially cause infection, the study said.

“You are protected, but others around you may not be,” says Saptarshi Basu, Professor in the Department of Mechanical Engineering and senior author of the study published in ‘Science Advances’.

Triple-layered masks ? even those made of cloth ? and N95 masks were found to successfully prevent atomisation, and therefore offered the best protection.

The researchers, however, clarify that when such masks are unavailable, even single-layered masks may offer some protection, and hence must be used wherever mandated by health officials.

Face masks can significantly reduce virus transmission by blocking both large droplets and aerosols, but their efficiency varies with the type of material, pore size and number of layers.

Previous studies have looked at how these droplets “leak” from the sides of masks, but not at how the mask itself can aid in secondary atomisation into smaller droplets.

“Most studies also dont look at what is going on at the individual droplet level and how aerosols can be generated,” Basu adds.

To mimic a human cough, the team used a custom droplet dispenser to pressurise a surrogate cough liquid (water, salt with mucin, and a phospholipid) and eject single droplets onto the mask.

“The pressurisation increases the velocity of the droplet and the [nozzle] opening time determines the size,” explains Shubham Sharma, a PhD student in the Department of Mechanical Engineering and first author of the study.

“Using this, we could generate droplets ranging from 200 microns to 1.

” The team used a pulsed laser to cast shadows of the droplets, and a camera and zoom lens to capture images at high speeds (20,000 frames per second).

The team also investigated the effects of varying the speed at which the droplet is ejected and the impingement angle.

They found that single-layered masks could only block 30 per cent of the initial droplet volume from escaping.

Double-layered masks were better (about 91 per cent was blocked), but more than a quarter of the daughter droplets that were generated were in the size range of aerosols.

Droplet transmission and generation was either negligible or zero for triple-layered and N95 masks.

The team also dispersed fluorescent nanoparticles of the same size as the virus in the artificial cough droplets to show how these particles can get entrapped in the mask fibres, underscoring the importance of disposing the masks after use.

“Studies are also going on to propose more robust models to understand how this atomisation is actually taking place,” says Basu.

“This is a problem not just for COVID-19, but for similar respiratory diseases in the future as well.