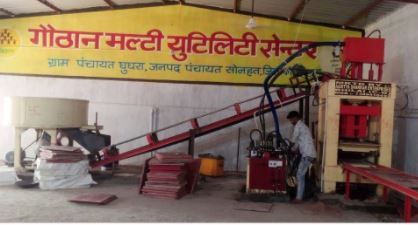 Under the ambitious Gudhan Nyay Yojana of the state government, to make Gowthans self-reliant, cow dung is being developed as Adarsh ​​Gauthan by preparing vermi compost and other products through self-help groups and increasing the source of self-earned income. In this series, multi-utility centers are being set up in Gauthans of Korea district, which are getting all-round appreciation. It is noteworthy that a letter has been issued by the Agriculture Department of the state government, instructing to construct a multi-utility center on the lines of Korea district in Gauthanas across the state. Efforts are being made by the district administration to make Gowthans self-supporting by conducting various activities related to livelihood of self-help groups through the Multi-utility Center.

Fly ash brick, facing pole, four link facing and paver block tiles etc. are being constructed by the women in the multi-utility center at Gauthan in village Ghughra and Pusla under Sonhat development block. These works are being done by women themselves and after that they are also understanding marketing skills for the sale of manufactured goods. Through this, women are not only becoming financially capable but also developing business sense in them. Thus, the Gothan of Korea district are becoming a means of livelihood for women.
The Multi-Utility Center, built at Gauthan in Village Ghughra and Pusla under Sonhat development block of Korea district, was inaugurated by Chief Minister Mr. Bhupesh Baghel during his visit to Korea on 11 December. The Chief Minister not only praised the Multutility Center of Korea district but also encouraged other districts to take similar initiatives. In this center, economic activities like fly s, brick making, paver block, sandal making, agricultural equipment center, biological medicine center, rice mill, e-rickshaw are being run by 17 women self help groups. The Chhattisgarh government’s ambitious Suraji Village and Godhan Nyaya Yojana is being jointly written for the development and progress of villages.